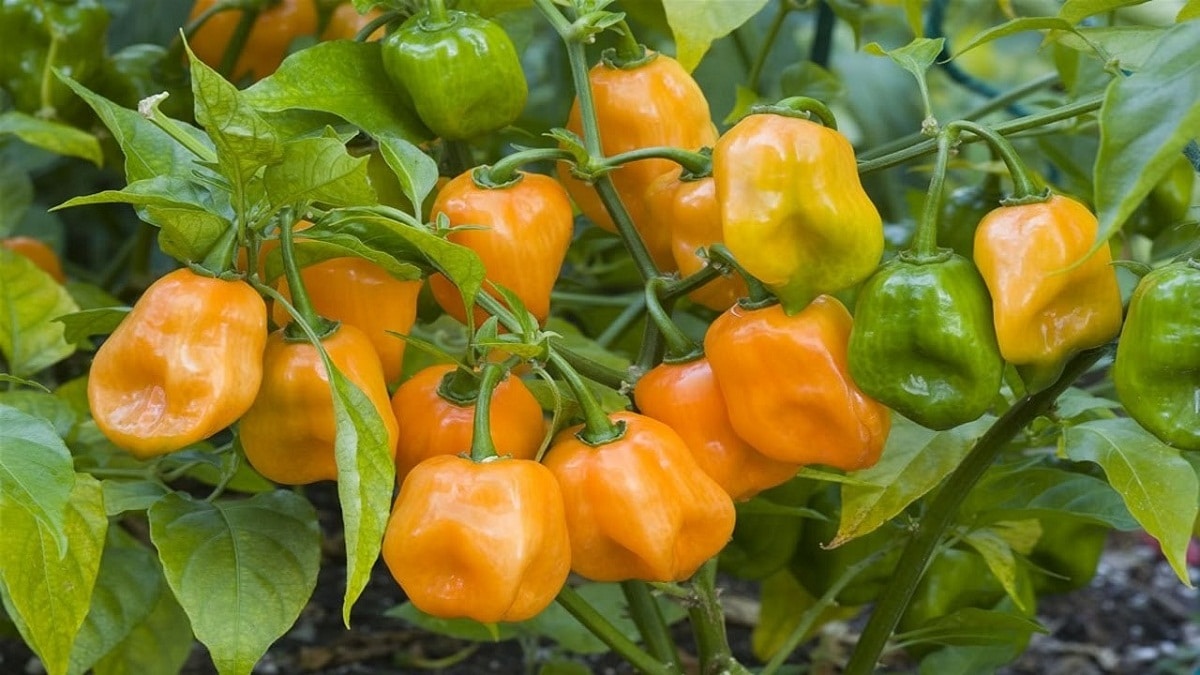 El Habañero pepper It is among the most important spices globally, which is due to the great culinary versatility that it offers when used in the kitchen, either in order to season and / or as an accompaniment to numerous foods, since it has a powerful flavor.

The habanero pepper, scientifically known as Capsicum chinense "Habanero", it is a notable spicy spice within the genus Capsicum. It usually appears in an orange (semi-ripe) and reddish (mature) tone, although it is equally possible to find it in other colors such as brown, pink, white and yellow.

One of the main characteristics of the habanero pepper is that it has a peculiar shape that, in some way, reveals its flavor. In addition, This chili stands out for going through various stages of maturation in which it acquires a different color.

It starts out greenish, then turns orange and finally takes on a red color. Likewise, It is also possible to get other varieties that have varying degrees of heat.

Like the pepper, the habanero pepper is part of the family Solanaceae, which is among the favorites of many people when filling their refrigerators, especially during the summer, since it allows not only to eat it fresh, but also to use it to prepare sauces and even as an accompaniment to various hot dishes and stews.

Origin of the habanero pepper

El capsicum chinense It is native to the lowlands found in the Amazon basin, a place from which it spread to Colombia, Venezuela, the Antilles, Guyana, etc., thanks to both the potters and the farmers who used to migrate to these lands.

However, currently Mexico has managed to position itself as the main country for its production, since each year it manages to collect around 1.500 tons of habanero pepper, which has allowed it to be considered as a true reference within the gastronomic culture of the Yucatan.

Our seeds have a very high germination power, which is why it is very easy for them to germinate without many problems after a couple of weeks from cultivation.

In this sense, it should also be mentioned that just grow it inside a coconut fiber substrate that it has sufficient humidity, and as for the subscriber, we can say that it is possible to find numerous commercial substrates whose composition includes a certain amount not only of organic matter, but also of potassium, phosphorus, nitrogen and other micro elements.

The habanero pepper has the ability to tolerate constant and direct exposure to sunlight without problem, although this is not usually highly recommended, because it accelerates not only its ripening process, but also the color change. In any case, it is usually advisable to cultivate the capsicum chinense in a space where it is at an approximate temperature of 23-25 ​​° C.

When grown indoors, it can be a bit easier to make sure to maintain that temperature, however, it is necessary to ensure that adequate exposure to the sun is provided for several hours a day, in addition to following a good humidity regime for the substrate.

When summer arrives, temperatures tend to increase, as do the water needs that presents the habanero pepperTherefore, it is important to make sure to keep the substrate constantly humid in order to promote good absorption of both water and nutrients through its roots.

It is essential to bear in mind that irrigation water stagnation must be avoided, since otherwise it can cause rotting and facilitate the development of fungi. In relation to water quality, it is possible to use tap water as long as generous waterings are made frequently in order to mobilize the salts that have accumulated around the substrate.

As for its pruning, you have to make sure to keep its growth under control by performing cleaning pruning periodically, to prevent it from becoming a small jungle inside the home.

Properties of the habanero pepper

Among the main properties it has, it is possible to highlight those mentioned below:

The habanero pepper has a great source of compounds because it has so much capsaicinoids as with carotenoids, and according to various investigations, both elements have an immense biochemical activity. So its consumption helps prevent and also protect the body from various degenerative conditions, which could significantly affect your health.

The presence of capsaicin in the composition of capsicum chinense it has allowed them to be highly valued in the diet of many people; In addition, they have a high contribution of vitamins A and C, magnesium, potassium, iron, niacin, thiamine, and riboflavin, also having a reduced level of sodium.

Capsaicin is the main substance in the habanero pepper, which gives it that spicy sensation that characterize, and it stands out for being very useful to promote blood irrigation, and it is even considered that it has the ability to help prevent the development of blood clots, at the same time that it prevents the hardening of the arteries, thus reducing the risk from having heart attacks.

In the same way, by having a high contribution of vitamins A and C, it also They are very useful to avoid the development of vision problems, as well as in the gums, mucous membranes and also in the teeth.

Among the main benefits that habanero pepper can offer, the following can be mentioned:

It is a great source of vitamin A and has twice the amount of vitamin C, which citrus fruits usually offer, in addition to helping to optimize the immune system. Because it has a high content of both antioxidant flavonoids and beta-carotenes, its consumption helps to slow down aging, thus maintaining a younger appearance.

Helps relieve headaches, since having capsaicin has the ability to fight migraines and, at the same time, it is of great help to relieve arthritis. It promotes general well-being because its capsaicin content provides great antibacterial properties, which help prevent and treat various sinus problems.

It stands out for being a powerful anti-inflammatory, so its consumption is very effective in reducing not only muscular pain, but also rheumatic pain; likewise, it allows to reduce the levels of cholesterol present in the blood.

It is very beneficial for metabolism, since its contribution of capsaicin is characterized by being a thermogenic agent, which allowsIncrease metabolic activity and consequently, it allows the body not only to burn fat, but also calories.

It favors happiness, since its consumption encourages the production of endorphins and consequently, it allows to develop a pleasant state that causes a sensation similar to that experienced when consuming alcohol.