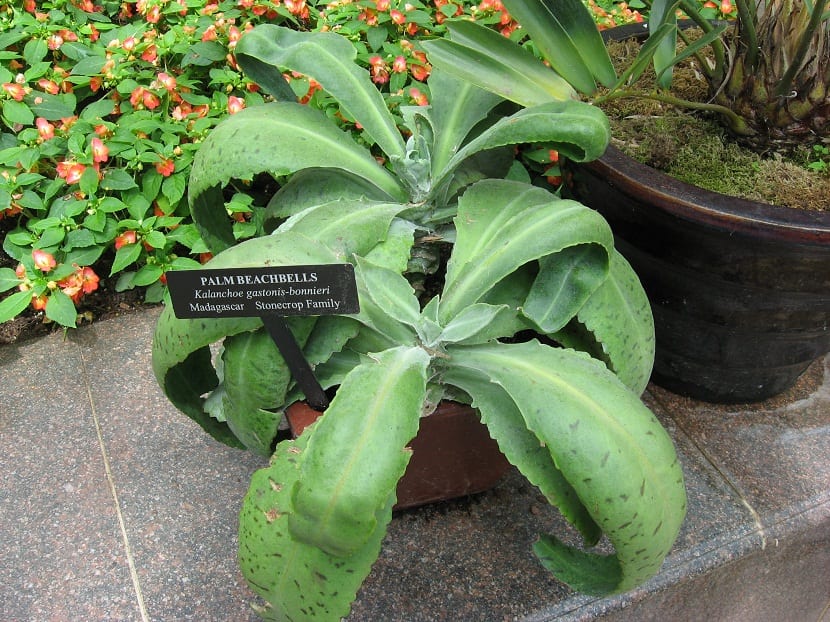 El Kalanchoe Gastonis-bonnieri it is a perennial plant of the Crassulaceae family, of rapid growth that can reach up to 45 cm in height. The flowers of the plant are very distinctive, attracting hummingbirds, butterflies, bees and other insects to the garden. In addition to being one of the favorites in gardens, it is also popular for its medicinal properties.

Characteristics of the Kalanchoe gastonis-bonnieri

It has formidable ovate-lanceolate leaves up to 50 cm long. These are green covered with waxy white giving it a greyish-green countenance, with brownish-looking spots; they also have the particularity of having small seedlings along the edge of the leaf.

Its inflorescence occurs in the fall and develops a stem up to 90 cm high that is divided in its upper part with several groups of pale shoots that later darken, to become the cups that support the reddish petals with flared tips and a yellow interior. .

It is a plant native to the northwest of the island of Madagascar, which is currently present in the southern hemisphere; South America, Africa, Asia, Oceania and others. In the wild can be seen in the calcareous rock areas of tropical forests.

The kalanchoes they are relatively easy to grow and their flowers are very pleasant for their color, in addition to their firmness. There are those who mistakenly leave them aside, once flowering is complete, which can be a mistake.

You just need to cut the flower head and then allow the plant to rest in some water and resume its care in the usual way. The plant blooms naturally in the spring. However, some professionals manage to make it bloom throughout the year.

The plant is open and sunny, mainly during its growth stage in summer. In winter and if it is in a closed space, it is important to place it near a window located to the south. Watering should be done sparingly during the summer and further reduced in winter.

Between the waterings you must allow the surface of the soil to dry well. Be attentive to the face of the leaves, to supply water. At no time allow the plant to be exposed to temperatures below 12º C. In summer, apply a liquid fertilizer up to twice a week.

They adapt well to poor or rocky soils. If you want to plant in pots, you can use cactus soils or soils for flowering plants mixed with sand. The species multiplies easily; by seeds or cuttings. As for trimming the plant, It is a more appropriate technique for the home due to the comfort that it entails.

Much has been said about the medicinal properties of the Kalanchoes and in the present case, the Kalanchoe Gastonis-BonnieriIt is widely used in traditional medicine. Its leaves are used to soothe headaches and the symptoms of colds and flu; in the treatment of bug bites, bruises, burns, cuts and ulcerations.

The scientist Josep Pámies recommends its leaves for the treatment of cancer. In those cases that it affects the skin, can be applied directly to the tumor surfaceIt can also be consumed.

In the countries that make up the southern hemisphere of the planet, in addition to the aforementioned treatments, its leaves are used internally and externally, to treat various diseases such as; deep wounds, infections, rheumatism, inflammations, hypertension, stones and diarrhea. In relation to psychiatric illnesses; schizophrenia, panic and fears.

If you plan to give medicinal use to Kalanchoe Gastonis-bonnieri, It is recommended to consult a doctor since the consumption of it can be harmful for the following reasons: