The color of the palm leaves is green. It may be more or less clear, but if they are healthy, it will be clearly seen that they are so. There are only a few exceptions, such as Chambeyronia macrocarpa for example, which takes out its new red leaf, or the variegated forms of some species, such as the saw palmetto or the Caryota mitis.

For this reason, when we get to the point where we wonder why my palm tree has yellow leaves, we will have to find out the cause, since there are several. Some are easy to fix, others will take longer.

Why do palm leaves turn yellow?

When a palm tree turns yellow or yellowish it is because there is something that prevents it from producing chlorophyll, which is the pigment that gives it its green color. When it occurs, we say that the plant is chlorotic. But the cause can be very varied: lack of nutrients (iron or manganese is the most common), excess or lack of irrigation, a very heavy and compact soil, excess sun, pests and / or diseases.

It is very important that we find out why it happens to them, otherwise we may be able to solve it now, but if we do not know the origin of the problem we run the risk of it reappearing.

Is your palm tree turning yellow and you don't know why? Now we are going to talk to you in more detail about each of the causes of your problem, and how you can treat it:

Palm trees need nutrients in order to grow. So, it is important that they are planted in rich soils, since otherwise their leaves will turn yellow, which is what happens to the Syagrus that are kept in gardens with clay soil for example. This is something that happened to me Syagrus coronata a winter. As you can see in the image above, the new leaf ended up yellow; it only had the green margin.

In order to solve it, can be watered with a biostimulant for plants, that has a little of everything, both macronutrients (nitrogen, phosphorus and potassium), and micronutrients (make sure it contains iron and manganese). The frequency will vary depending on what is indicated on the product, but is usually once a week or every 15 days. The change, after a few months, is spectacular, you'll see.

Excess or lack of irrigation

Irrigation problems affect the roots, and consequently the rest of the plant. Whether a palm tree is watered a lot or a little, the leaves will lose their ability to produce chlorophyll and will turn yellow. For this reason, it is necessary to water only when necessary, that is, about two or three times a week during the summer, and a little less in winter so that the soil has time to dry out a bit.

To know exactly what is happening to it, you have to find out if we are watering it too much, or too little. Therefore, we are going to know the symptoms of excess and lack of irrigation and what must be done to save it:

Heavy and / or compact soil

Sometimes the problem is not so much the nutritional component of the land as its texture. For example, soils that are composed mainly of clay tend to be very compact and heavy. This makes the water take longer to absorb and filter. So even if we think that we are watering when necessary, in reality it will not be so because the innermost layers take longer to dry.

If we take this into account, we will find a palm tree that shows the typical symptoms that it would have if it were watering too much. And, therefore, we will have to treat it in the same way: space the waterings more, treat with fungicide. But in addition, it is necessary to avoid planting these plants in heavy and / or compact soils. If you have such a soil, make a planting hole of one square meter, cover its sides with a shading mesh, and fill it with universal substrate (for sale here!) mixed with perlite in equal parts.

Palm tree sunburns end up brown, but when they start out they are yellowish. The leaf loses its natural color, more or less quickly depending on whether the sun hits it directly, or through a window or the branches of a tree for example.

In any case, will appear only on leaves that are exposed; that is, if it hits the upper part, only the newer leaves will be damaged; and if you hit only one side, the rest will look green. In any case, the treatment is the same for all of them: take them to a more protected place, or put a shading mesh over them as an umbrella.

There is only one exception: if it is one palm tree that needs sun yes or yes, like those of the genus Phoenix, Chamaerops, Washingtonia, Butia, and many others, we will put it in semi-shade but we will gradually accustom it to direct sun. We will do this from the beginning of spring, exposing it to direct sun for one hour and increasing the exposure time by one hour each week.

Pests and / or diseases 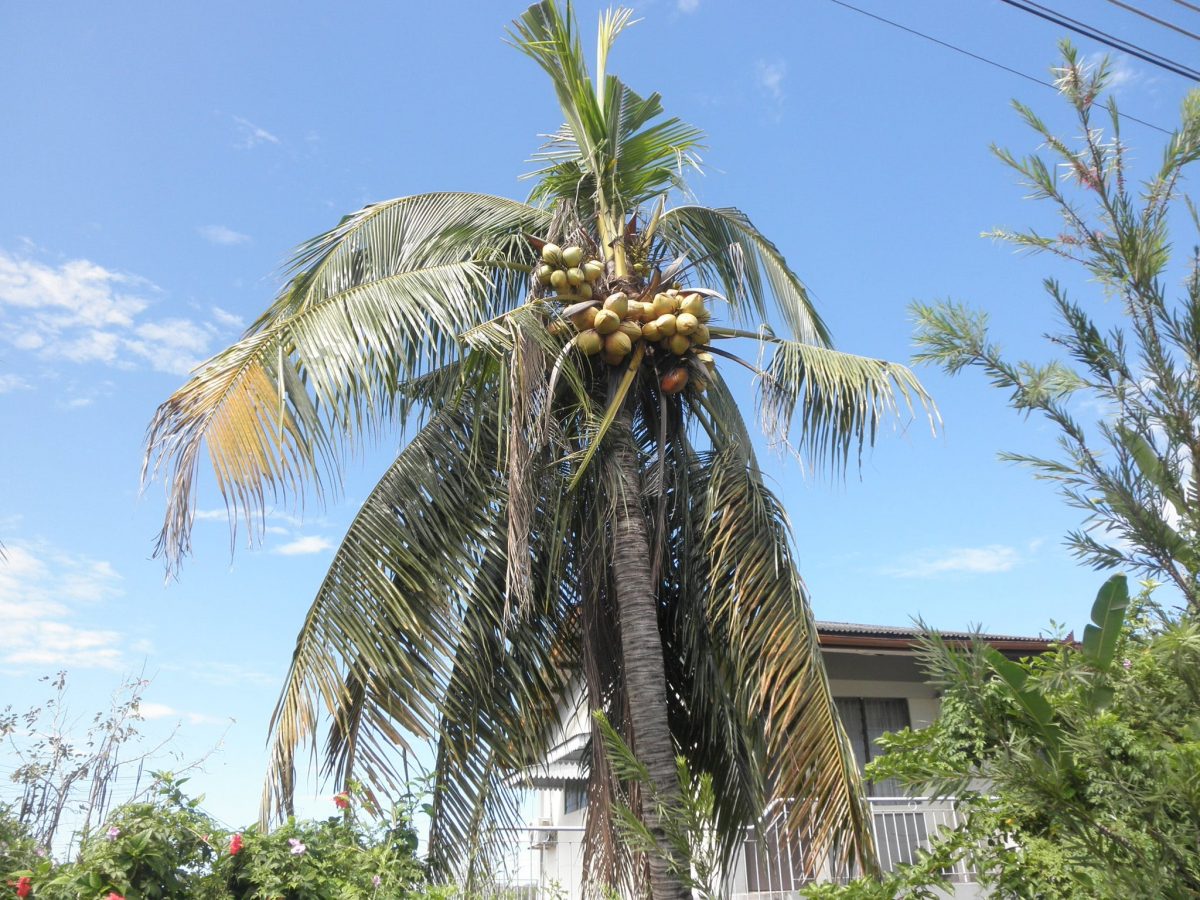 If your palm has any pests or diseases, it can also end up with yellow leaves. For example, The red spider or the mealybug are two parasites that feed on the sap of the foliage, with which it loses color. Both are easy to identify, because the first produces cobwebs, and the second looks like a small cotton ball or limpet. You can eliminate them with diatomaceous earth, which is a natural insecticide.

The diseases that cause yellowing of the leaves are transmitted by fungi, and therefore are often related to overwatering. But in tropical America there is a so-called lethal yellowing, which mainly affects coconut trees (Cocos nucifera), and is transmitted by a virus. Palm leaves turn yellow quickly, starting with the oldest. Unfortunately there is no treatment.

Have reached the end of their life

Palm trees are evergreen, but this does not mean that their leaves do not die. In fact, the oldest leaves, which are the lower ones, will tend to lose color over time. They will turn yellow and then brown. This is a natural process, and it does not harm the rest of the plant. When they become dry, we can cut them if we want.

What to do if my palm tree has yellow and dry leaves?

If your palm tree is yellow and dry, it is important that you first find out what is happening to it, since, as we have mentioned above, there are several causes that can cause the leaves to turn yellow. Later, maybe you will consider cutting them off, but… I am in favor of leaving it on until it is completely dry, that is, until it turns brown. Why?

Because as long as it has some green (that is, chlorophyll), even if it is so little that it cannot be seen with the naked eye, it is good for the plant. Also, a leaf that is still yellow, has the petiole -the stem that joins it to the plant- alive, and if it is cut, especially if done in spring or summer, the smell of that wound can attract very dangerous insects for her like him Red weevil or the paysandisia.

In fact, this is one of the main reasons why palm trees should not be pruned during those seasons, but it is much better to wait until the cold arrives, which is when these pests are much less active.

However when it is already brown, it is because the life of that leaf has come to an end, and that is when it no longer has any use for the palm tree. So now is when we can cut it off. Of course, we will have to do it with previously disinfected anvil scissors so as not to run any risk.

As you can see, there are many reasons why palm leaves turn yellow. We hope that this article has helped you to know how to treat them.

Full path to article: Gardening On » Plants » Palms » Why does my palm tree have yellow leaves?