Today we are going to talk about a tree whose fruit is well known and commercialized. It's about the carob. Its scientific name is Ceratonia siliqua and it is an evergreen tree. A derivative of chocolate called carob is extracted from carob beans and is used to make sweets and chocolates for diabetics.

Do you want to know how the carob is grown and what properties it has?

The carob tree is a typical tree of the Mediterranean area that is capable of reach heights of up to 10 meters. The leaves of the carob tree have been used as livestock feed for a long time. It can be said that this tree takes advantage of everything, since its wood is also used to make handicraft furniture and as wood for the fire.

The area with a Mediterranean climate in Spain It is where this type of tree is most present. The second producer is Portugal, although Greece and Morocco also produce on a large scale.

Since it is a tree that lives in Mediterranean areas, it requires mild climates more typical of the coast. Its most potential distribution area is in areas close to the sea with latitude of about 500 meters high. In cultivation it resembles the orange and almond trees.

This tree grows in arid and calcareous soils that are usually of medium consistency or even loose, although it does not have problems growing in other types of soil. The important thing is that when watering it, the soil must have good drainage to avoid possible flooding that weaken it and end up rotting. When this occurs, the carob tree is very prone to fungus and root rot.

If we want to start planting the carob tree, it is important to know the physical-chemical characteristics of the soil in order to know more precisely if it will be able to develop well. It is also important to clean the crop debris from another previous harvest.

To prepare the soil properly, the subsoil must be plowed deeply in one direction. After 1-2 months, another deep plow is made crossing the first. Once the plow is finished, a fertilizer is made with organic matter that is well fermented and has phosphorus to facilitate the development of the roots initially.

So that the winter frosts do not affect too much, the ideal is to start the plows in autumn, so that the carob tree is planted at the end of winter. 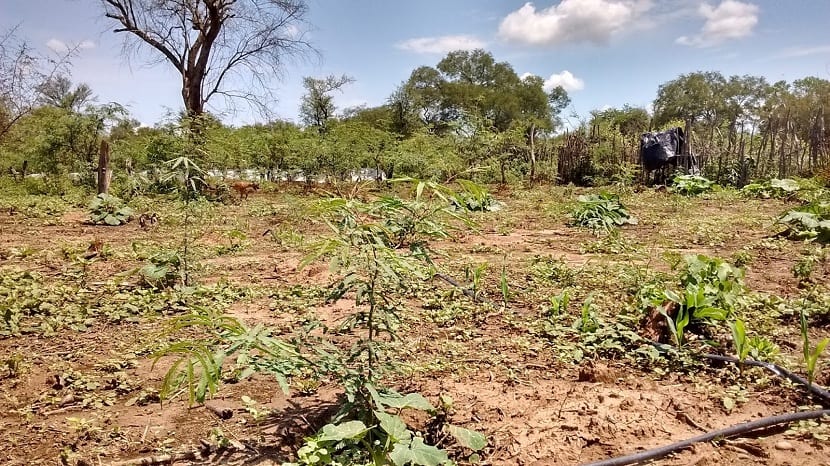 Once the milder temperatures arrive at the end of winter, we will begin to plant the carob tree. Since the tree reaches a large size, in ancient times it was planted in very wide frames up to 20 × 20 meters. Currently, for a better use of the territory, there is a tendency to reduce the carob planting frames so that the trees are more profitable and smaller.

During the first years after being sown, it is recommended that they be watered five or six times. It is not necessary to irrigate with abundant water, since these trees are very resistant to drought. They can bear fruit perfectly with annual rainfall of 220mm. It must also be said that it is important that it rains for the fruiting process to be correct. It is estimated that the amount of precipitation necessary for its proper development is 350mm per year.

Regarding the growth of the carob tree, it can be said that it is quite slow, although it depends on the area where it is. If it is found in areas where the lowest temperatures prevail, the carob tree makes a winter rest to save energy to survive.

The growth phases can be two to three per year, in spring and in autumn. It begins to bear fruit depending on whether they are grafted trees (from 5-6 years) or they are from seed without grafting (from 7-8 years). So the best production begins to occur after 10 years.

A maintenance that must be done almost obligatorily is the pointing of the branches. The branches usually grow and lengthen horizontally. Thus, it is very possible that when the fruits grow the weight of the carob beans will cause the branches to break.

To cultivate the carob tree, several things must be taken into account such as plowing, compost and pruning.

In a normal carob plantation, two plows a year are usually made superficially. The most optimal is to make three plows, if possible, with digs at the foot of the trees. One of the plows is done in autumn, after harvesting, the second in April and if there is a third it will be done at the beginning of the fruit's maturity, in August.

For any "old school" person, the carob does not need any fertilizer. However, if we want to increase its production and of greater size and quality, fertilization is necessary. It is advisable to pay once before planting the tree and continue to pay it every three years. Subscribing should be done when the fall plowing is done. The most ideal fertilizer for carob es organic matter with phosphorus.

The first years of growth do not require any type of pruning. At 5 years it is recommended to do a first pruning to eliminate bad stems. This tree does not need pruning itself, but it is important to do so to give the trees a proper shape and maintain them for longer life.

To carry out the pruning, you must bear in mind that this tree will always bear the fruit in the same place and that it is very sensitive to attacks by parasites and wood insects, so very thick and numerous cuts must be avoided.

To make the cut it is important to find a balance between what is most beneficial for the plant and what is for its production. If the pruning is done well, the tree will produce more, be healthier and increase the quality and size of the carob beans.

The best time to prune is early fall, immediately after harvesting. As the flowers come out in the nodes of the branches, a fruiting pruning is not necessary as in other trees. Enough with a pruning to clean every 2 years and a more intense one every 5 or 7 years to correct imbalances in the cup.

You already know a little more about the carob tree.