The carrot is one of the vegetables that is most present in our recipes and we are talking about an ingredient of great versatility and in turn it is filled with a large number of benefits. At present we can find a great variety of carrots, however they are not so easy to find because the most abundant are orange carrots, being the ones that have an extensive production.

In western countries the carrot that has remained is of Dutch origin, the one we all know that has an orange color. However, carrots that originate in eastern countries and that we can sometimes find in markets are purple, yellow or can even be white.

Carrots can be different types, but this depends on the place where they are grown or also the time in which they are harvested. Of the most common for food consumption we can mention the following.

This is a variety of carrots that differs by its size, since it is medium-long, has a wide neck and is usually pointed.

These carrots they usually exceed 20 centimeters in lengthThey have a fairly intense orange color and a somewhat sweet flavor, this is the type of carrot that is most found in the markets.

You are on the other hand have a shape similar to a cylinder. The dimensions of this type of carrots are approximately 15 to 20 centimeters and are usually about 3 cm thick.

The sale of these in particular is carried out in the countries of Europe and at the same time we can find more varieties within this classification.

This is one oversized variation which has a length of about 25 cm and unlike the first ones, these have a soft orange color. It is used both to consume them fresh as well as to make preserve or frozen foods. 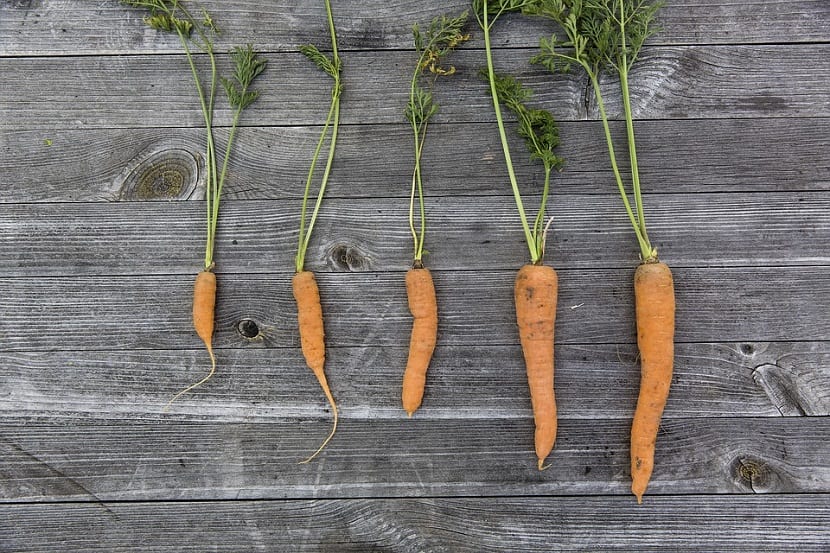 As its name suggests, these carrots have a round shape and are about the size of a golf ball. These are used for gourmet cooking, but also for the frozen and canned goods industry.

These are very similar to Nantes carrots, they only differ in their size, which is approximately 12 and 15 cm. The color of these is orange but close to the leaves they have a shade of purple and green.

How to grow carrots in a pot?

The carrot is a vegetable that can be sown throughout the year, preferably in the spring season, between the months of February and May.

For this we only have to sow the seeds about 1 or 2 cm deep in the ground, taking into account that each of the plants needs about 10 cm of space. Besides, we cannot transplant these, therefore it is not convenient for us to change their place and place them in another pot.

In moment the seed begins its growth, we have to leave only the strongest ones, eliminating all the others. Finally to collect them it has to be at 3 or 4 months.

Carrots have the ability to withstand all types of weather and their color depends a lot on it. In the climates that are too hot these have a lighter shadeThey are usually longer and thinner, unlike cold climates that turn yellowish in color and are a little shorter. The land in which we must sow it It has to be light and sandy, capable of retaining water and with this you will have realized that it is quite demanding vegetable.

As for lighting, in the summer it should be in a place that does not have too much shade, since in this way we can prevent moisture loss.

Pests and diseases that affect carrots

This is the larva that causes the main damage, being a parasite that can cause quite significant damage. These penetrate the root, forming places where they make winding galleries, especially on the outside, which will later cause the carrot to rot.

These feed on the carrot, biting the epidermis, causing large curls in the leaves and causing them to turn yellow. On certain occasions, the roots are damaged by aphids, being very easy to recognize due to its white and woolly appearance.

These are insects that belong to the Nuctidae family of the genus Agrotis. These caterpillars consume the upper parts of the plant at nightwhile in the day they are found on the ground or under dry leaves.

These attack the roots of the carrot causing galleries that often cause them to rot. In certain countries, this is a plague which has become one of the important ones.

This initially gives the feeling of being like small brown spots, areoles of yellow color and others scattered by the edges of the leaves.

When the number of the spots increases, it causes the death of the intermediate tissues, pHence, the plant appears burned by the sun or by improper treatment.

This is one disease caused by certain fungi They belong to the group of oomycetes, which usually occur in a large number of different vegetables, taking rainwater or irrigation water as a means of transmission.

This usually appears as brownish spots or a powder that is very ash-like and has a greasy appearance on the upper surface of the plant's leaves, causing them to suffocate until they become dry.

This is a fungus that appears as a white powder or similarly to the ash quite common in the leaves, shoots and in the same way in the fruits. The two fungi that may be responsible for powdery mildew in carrots are the Erysipheumbelliferarum and Laveillulataurica.