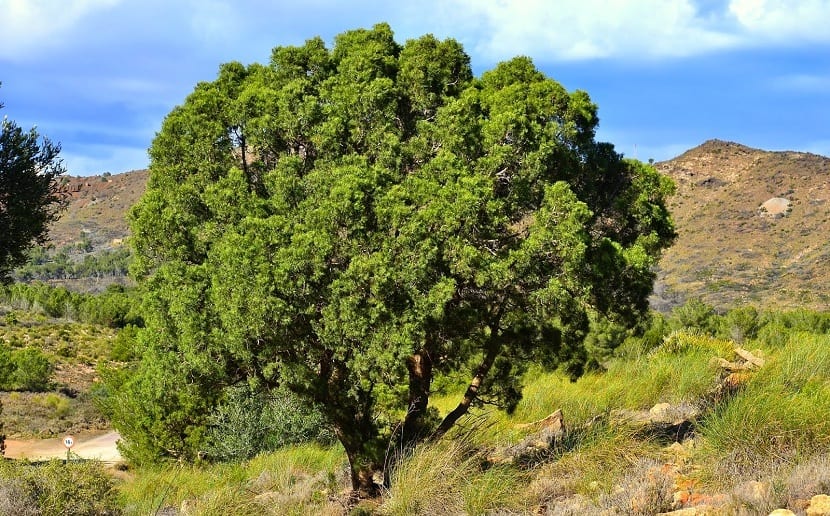 Today we come to talk about another of the most used ornamental trees for the decoration of parks and gardens. Its about Cartagena cypress. Its scientific name is Tetraclinis articulata. In this article we will focus on the main characteristics of this tree, the uses and some curiosities.

Do you want to learn about the cypress of Cartagena? This is your post 🙂

El Tetraclinis articulata it is a low tree. It only measures between 4 and 7 meters in height, although if the climate and the soil are very favorable, it can reach 15 meters. The crown of the tree is cone-like and, as they age, it becomes irregular.

The trunk is grayish and straight. The leaves are of the scaly type and appear jointed. As for their fruit, they are smaller cones than those of the common cypress trees that are planted in cemeteries. They are made up of 4 heart-shaped scales and house small winged seeds. There are male and female. The first ones are in size very small with 4 or 5 whorls of 4 pollen scales. Each one has 4 pollen sacks. On the other hand, the female ones are erect, green in color with bluish and pruinous tones when they are young.

El Tetraclinis articulata it is found mainly in North Africa. It is rarer on the European continent. Naturally, they can only be found in the Region of Murcia in the Sierra de Cartagena (hence its common name of Ciprés de Cartagena).

Many authentic populations of these specimens survive in this mountain range and they are considered a relic of the past.

In Africa cannot live in high and sub-humid areas because the weather doesn't allow it. However, you can do it in Spain. It usually inhabits places below 400 meters of altitude in a semi-arid environment in which it prefers sunny and stony slopes. Most of the natural specimens found in our Peninsula in the area of Calblanque Regional Park. It is an area that has been declared a Calblanque Regional Park, in an area declared an Ecological Reserve Zone to protect and conserve the main populations of the Tetraclinis articulata.

If you visit the Park you can find them planted in the Arboretum and in areas of Monte de las Cenizas, where the natural specimens will be placed.

This species is emblematic of the Murcia area. The cypress of Cartagena is a relic that comes from the late Miocene and that, by exclusivity, has become a continental territory where this plant is protected.

Numerous studies have been conducted and published in journals on the little diversity that remains of this species. Individuals are increasingly scarce, so the risk of disappearance is quite high. During the XNUMXth century, it was repeatedly warned that the species was going to disappear. Currently the populations are in good condition thanks to the excess of protection and surveillance that is being given. The latest censuses carried out show a figure of 7500 specimens for wild populations. However, the prospects that await us with climate change define a very different panorama.

Due to the increase in average temperatures and the scarcity of rainfall, it could lead to the total extinction of this species in the mountains of Cartagena. In addition, although without conclusive evidence and results, the Department of Botany of the University of Murcia has suggested the hypothesis that Murcian specimens have anthropic origin and that this species was brought to Cartagena in Roman times or earlier by its usefulness to support mines with its wood, from which resistant beams were obtained.

In addition to Ciprés de Cartagena, it has other names such as Sabina Cartagena, Sabina mora or Tuya de Berbería. Where it comes from (North Africa) it is known as Araar.

Within the Iberian peninsula it is one of the rarest natural trees. It is considered practically like a vestige of the past. The ancestors of today's trees must have come from Africa about six million years ago. This could happen when the two continents were dry and the Mediterranean Sea did not exist.

It is considered a Vulnerable Species within the Regional Catalog of Protected Wild Flora of the Region of Murcia (Decree 50/2003, BORM No. 131), whose Conservation Plan has been drawn up by the Department of Ecology of the University of Murcia and directed by Miguel Ángel Esteve and Jesús Miñano.

To protect them against any danger, both from forest fire and from soil requalification, the populations of Tetraclinis articulata Spanish have been considered as Priority Habitat by the European Union.

Although growth is slow, it is used to repopulate some warmer areas. Its ability to sprout after fires makes it a good option for repopulation after fires. The wood is reddish and aromatic. It is very easy to work with and is resistant to rot. It was appreciated by the Romans and is currently used for luxury cabinetmaking.

It is mainly used as a landscape resource. It is used in reforestation and restoration of arid or burned areas. In Mediterranean parks and gardens they are perfectly suited for their size and characteristics. It supports well the puddles, long frosts and high humidity.

It is certainly one of the species with a future, from this magazine nurserymen are encouraged to multiply it and offer it as one of the best restocking and gardening plants for areas with soil and water problems. It is quite resistant to drought and, therefore, it can be planted in areas where there is a risk of species disappearance due to erosion.

As you can see, this species is very special in our peninsula and we must help protect it. Its conservation is not only in the hands of specialists but in those of all of us who are going to visit the places where it is located.