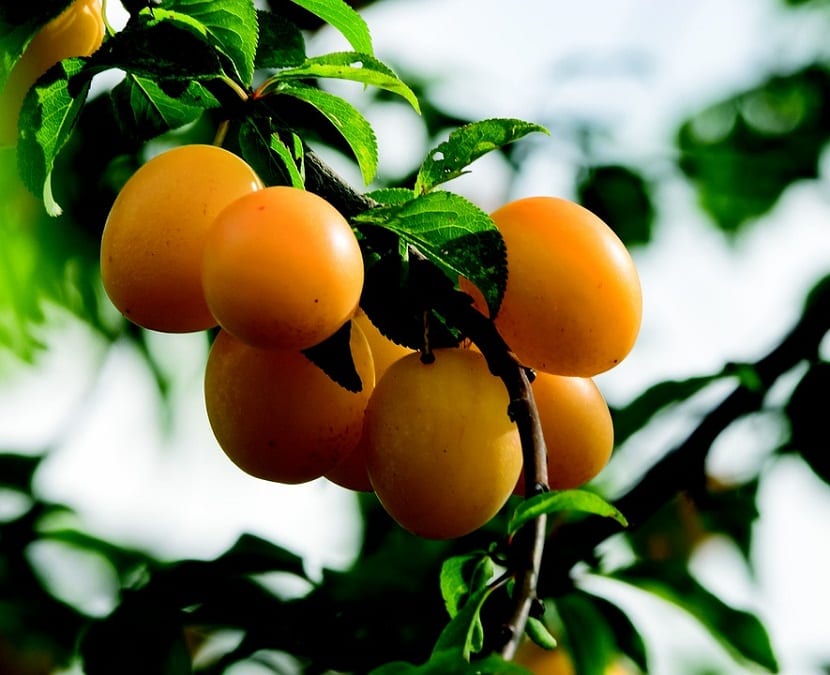 The plum fruit is really a very tasty and appreciated fruit. The tree derives from the Rosaceae family where the almond and peach come from. There are varieties of this tree that are concentrated in the Caucasus area, while there is another variety that occurs in China.

There are two varieties that are quite commercial, the Claudia Reina verde, of European origin and the Reina Claudia de Oullins, also European. Both have exceptional attributes that make them different from other plums.

In gastronomy they play an important role, since They are used for the elaboration of countless dishes and sweet and sour sauces, which serve as a side.

From a historical point of view, it is known that this tree and its fruit were highly appreciated by the ancient Egyptians, who They used to grow it and then let its fruits dry and keep them as a supply.

Plum trees of European origin are easily adapted to the continental climate. Its fruits are eaten seasonally and vary in color. The green ones are the so-called 'claudias'  and the dwellings are known by the name of 'prunas'.

The plums they are grown from single plum stems, which are transplanted to other areas. They adapt easily to environmental conditions. They also have the particularity that when receiving many hours of cold and self-pollinate, produce excellent fruit.

We must take care of them from the so-called "big-headed worm”, Since it feeds on the shoots in spring, which affects the tree.

Birds are not considered a pest but they harm the fruit, since they are dedicated to pecking it, spoiling the fruit. Bird nets are often placed as a protection mechanism.

The fruits are very rich and sweet, really pleasant to the palate. Regarding quality, it will vary according to the type of tree.

Plums they can be tasted fresh or can even be added to desserts and preserves, and rich jams are made from them. They are diuretic, so they help when we have stomach problems.

The leaves of this tree induce perspiration, also helping to avoid diarrhea. They are used to make poulticesas they relieve bites. It also works very well with certain skin problems.

On the island of Hawaii it is customary to use the sap as a mild laxative. In China, the leaves and the fruit are used as a kidney and liver tonic. It is also believed to help improve vision. Similarly, it helps alleviate fatigue and weakness and is recommended when you have joint problems.

Studies are currently being carried out where they want to determine the ability of this tree to eliminate freckles or warts. Of its medicinal benefits it is said that It is a laxative par excellence and has vitamins E, C and A.

It contains pectin and sorbitol, whose compounds stimulate and promote intestinal transit. Studies carried out by Oklahoma State University have shown that the consumption of this fruit prevents osteoporosis.

The plum is rich in water, fiber and carbohydrates. However, contains almost no fat or protein. It provides potassium and, to a lesser extent, calcium phosphorus, magnesium and iron. The nutritional composition makes it energetic, refreshing, light and invigorating, in addition, due to its low caloric content, it is recommended in cases of obesity.

The juice extracted from its pulp cleanses and tones the body, in addition to providing other benefits to our body, such as:

As a curiosity we will say that in some towns they celebrate parties in honor of the Claudia plum, one of the best known is Nalda, a Riojan town where it is tradition to hold a party to publicize this fruit, the undisputed protagonist of the celebration.