El Cupressus sempervirens "Stricta", also known as Common Cypress belongs to the family Cupressaceae. It is an evergreen tree that is grown for ornamental purposes in city gardens and parks for its distinguished foliage and high resistance to pollution. It is a long-lived tree that under optimal environmental conditions can live from 100 to 500 years; in addition to being a large species that can exceed forty meters in height. 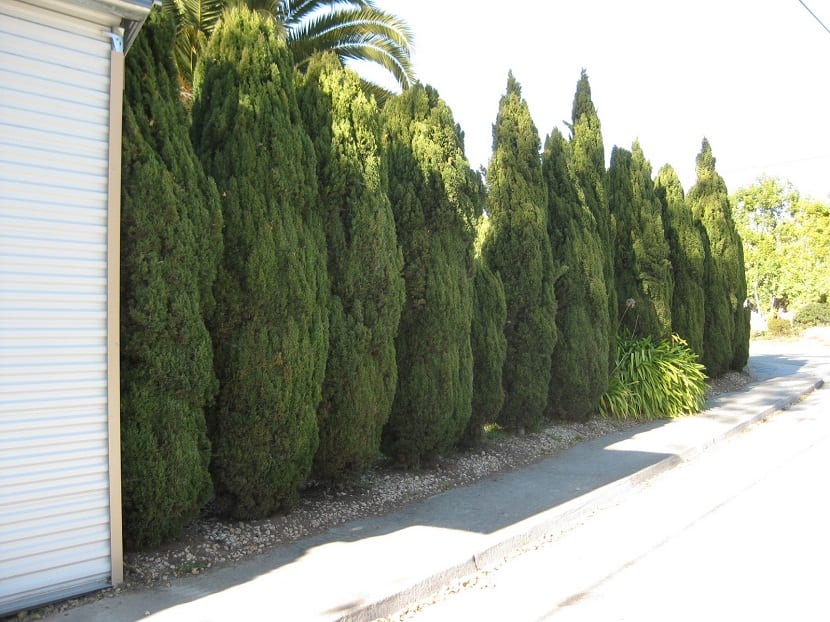 The native of the eastern regions of the Mediterranean, South and West Asia, which has spread elsewhere from 700 to 800 meters above sea level.

El Cupressus sempervirens “Stricta is a tree with a very erect trunkIt has a dense, strong and aromatic wood and this is covered by a brownish-greyish bark, it usually has a pyramidal crown, it is more branched in its lower part and its crown is usually pyramidal. Its overlapping leaves support each other, giving a fan-like appearance, they are dark green. During the summer its leaves and wood express an aroma similar to that of cedar.

In relation to its flowers, it is a monoecious species that during its flowering that occurs in spring, shows female and male flowers on different branches. They are not decorative, as they are very tiny and not very visible in the dense foliage of the tree. The female ones are spherical of violet color; while the male ones have a yellowish color and are less numerous.

Its fruits are capsules covered by 5 to 8 pairs of yellowish-gray scales that leave the seeds free when ripe. These are light achenes that are dispersed by the wind current around them.

The common cypress is a kind of sunny spaces, tolerates temperatures above 45º CIn the same way, it supports the low temperatures of winter. Regarding the soil, this plant adapts to any type of soil, as long as it has good drainage and organic substances for its development. However, it grows well in calcareous and clay soils that have acidic and basic pH.

Adult cypress trees are satisfied with the water they receive from the rain, now those younger specimens must be irrigated twice a week during the first trimester after implantation and then every two weeks the following spring. In case of extensive drought you must apply irrigation every time the soil is dry, trying to avoid stagnation of water that can cause rotting of its roots.

If you want a more harmonious growth of the cypress, plant 3 to 5 kg of compost at a distance of approximately 60 or 70 centimeters from the collar. At the beginning of March and August, potassium sulfate-based fertilizers will help you increase the resistance of the plant to fungal diseases.

This species is prone to attack by aphids (cinara cupressi) that take root in its branches to feed on its sap, which in the long run causes the dryness of the plant, considerably affecting its appearance. The infestation caused by aphids favors the appearance of fumaggine, a delicate fungal disease.

You must place the seeds in a soft and concrete substrate that is always kept humid until the sprouts appear, which occurs in approximately 2 to 3 weeks. Place the seedbed in a sunny space And only when you make sure that the plant is easy to handle, you transfer it to the individual pot, where you will keep it until its final settlement. If you want to achieve better results, then sow numerous seeds, as these have very low germination capacity. The season for the cultivation of this species is spring.

Without a doubt, this is the most effective procedure, which at the same time guarantees that you obtain plants that are genetically similar to the original.