Shrubs that produce a large number of flowers are wonderful, but if they are also resistant to diseases and pests, they are plants that will give us many joys from the first moment we have them in the garden or on the patio. One of them is the one known by the scientific name Cytisus scoparius.

Throughout the spring, its yellow flowers sprout so quickly and in such numbers that its small leaves are almost hidden behind them. And all this can be done in your home almost without receiving any type of care.

It is a shrub native to Atlantic Europe, also found in the Iberian Peninsula. It is popularly known as black broom or blond broom, and it is an evergreen plant that reaches a height of 1 to 2 meters, with a rounded and compact bearing. The branches are thin, green and with few leaves.

The flowers, which bloom from April to July in the Northern Hemisphere, are yellow or pink and take on a certain butterfly shape. And the fruit is a black legume containing about six to seven dark brown-black seeds.

What is your care of the Cytisus scoparius?

Would you like to have a copy but you do not know how to take care of it so that it is well? Take our advice into account, and enjoy 🙂:

Has to be outside, in full sun. It does not have invasive roots, and as it does not take up much space, it can be planted without problems near other plants, pipes, walls, etc.

It depends on where you are going to have it:

As we said at the beginning, the black broom is a very grateful shrub, which also means that it does not need to be irrigated very often; What's more, if it were watered too frequently, its roots would most likely rot, since they cannot tolerate being flooded.

Thus, it is very important, at least at the beginning, to check the humidity of the soil or substrate before proceeding to water again. How do you do that? It's actually simple: you take a thin wooden stick, push it in as far as you can, and then carefully pull it out.

If when you extract it you see that it is more or less clean, it is time to water; But if a lot of dirt has stuck to it, wait a few days. Anyway, if you still have doubts, wait 2-3 more days.

By the way, remember that you should never water overhead, because if you do, the leaves and flowers could burn with the sun or rot.

Subscribing is especially necessary if it is in a very worn soil, and if it is planted in a pot. It must be done during all the warm months of the year, using products if possible organicsuch as compost, mulch, herbivorous animal droppings, egg and banana shells, and so on.

You can use compound (chemical) fertilizers that are sold in nurseries (such as this), but only if you want your plant to decorate. Likewise, you must bear in mind that you have to follow the instructions specified on the packaging to the letter, and that they can harm the environment. 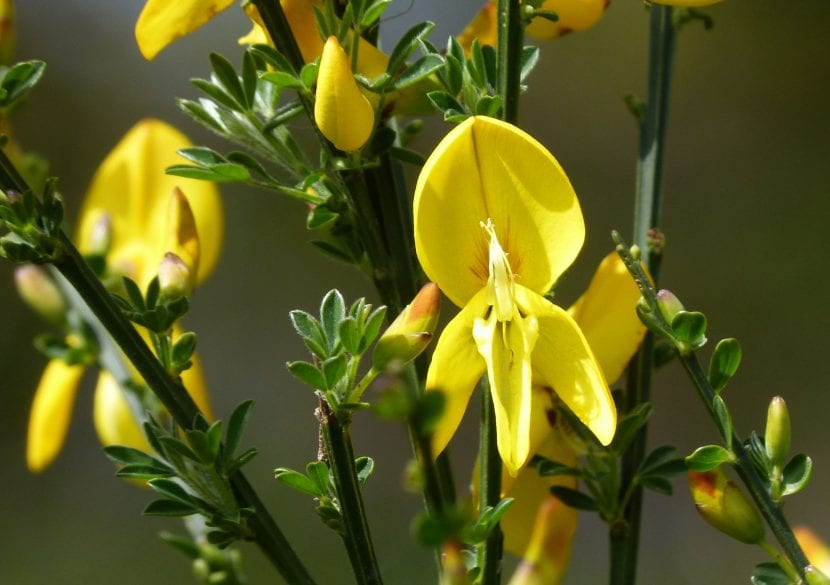 El Cytisus scoparius multiplies easily by seed in spring. The way to proceed is as follows:

Placing the pot outside, in semi-shade, and keeping the substrate moist, the seeds will germinate in about three or four weeks.

In spring, when the risk of frost has passed.

Can be pruned late winter, removing dry, diseased or weak branches, and cutting those that are getting too long.

What uses does it have?

El Cytisus scoparius it is a shrub of great ornamental value, being able to be used as a potted or garden plant. Whether in groups, alignments or as a solitary specimen, it is a very interesting species 😉.

Flowers have properties diuretic, antiarrhythmic, cardiotonic and hypertensive. They are used to treat spleen and liver obstructions, edema, high blood pressure, and arrhythmias.

What did you think of this plant?