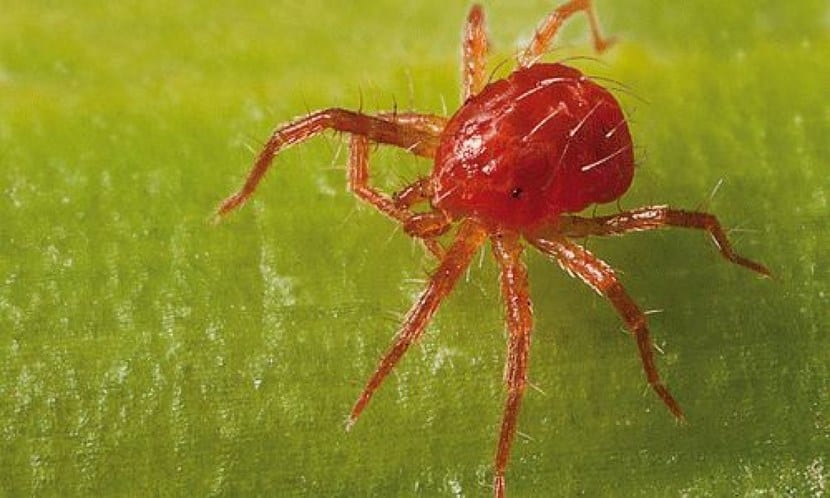 A few days ago I was cleaning the plants on my balcony when I noticed that one of them, which always grows without problems, was more fallen and withered. I began to study it and it was then that I noticed a thin fabric on the underside of the leaves. That was the indicator of the presence of one of the most common pests of plants: the spider mite.

The curious thing about the spider mite is that it is a tiny enemy that cannot be seen with the naked eye but only when it occurs in large numbers. A single red spider is barely half a millimeter long, so it goes unnoticed.

The essentials of the red spider

Popularly known as the red spider, we are actually talking about the Tetranichus urticae, a mite which is not red but changes color, turning a greenish hue during the summer and mutating to a reddish color as temperatures drop.

As we talked about, it is not a large spider but it lives in groups or colonies and it is possible to notice its presence because together they build a kind of web or cobweb on the underside of the leaves whose function is to hide from predators although it also facilitates the movement of the mite through the plant.

It is a dangerous pest not so much because of its damage in itself but because it is a polyphagous mite, that is to say that it can attack almost any plant. Regarding the consequences, the spider mite can be noticed by the yellow spots that are observed in the upper part of the leaves. They can be seen with the naked eye, much like the famous fabric they make. In more serious cases, the leaf dries out or it can affect the plant as a whole, stopping its growth.

Characteristics of the pest

While spider mites can appear all year round, It is more frequent during spring or autumn, that is to say with temperatures between 12 and 30 degrees Celsius. The heat favors its reproduction.

One of the reasons for their rapid proliferation is reproduction. The spider mite reproduces both by mating between male and female, the result of which is a series of eggs that give rise to females; as asexually, that is, when the females have males without laying eggs. This adds up to a rapid multiplication of the mite as it must be known that each female has 5 eggs per day and they can live up to 28 days.

For, fight red spider It is possible to apply sulfur, sprinkling it on the plant, avoid excess fertilizer and eliminate the affected plants. It is also recommended to practice crop rotation and if you detect the presence of the plague you can apply a home remedy by mixing it with 2 cloves of garlic, 2 chillies and half an onion. After straining it, you have to dilute the mixture in 3 liters of water and apply on the underside of the leaves.

Full path to article: Gardening On » Gardening » Diseases and pests » Knowing and fighting the spider mite