It is one of those trees from which it seems that it rains gold every spring. Its lovely little hanging yellow flowers cover the whole plant, making it look spectacular. Also, it looks great as an isolated specimen, but could also be used in lineups or in groups.

Know the care of the Gold rain, an ideal species to color your garden.

Origin and characteristics of the golden shower

Before we begin, it is important to say that there are two very popular plants known as golden shower. They are very similar, but they come from different places and their cultivation is not the same either. Therefore, I am going to tell you about both:

The shaft Laburnum anagyroides, it is a deciduous plant that grows to a height of seven meters. It has a trunk that usually grows straight or slightly sloping, from which branches sprout forming a rather branched crown. Its leaves are light green and trifoliate.

As we said, in spring flowers appear grouped in hanging clusters that can measure from 10 to 20 centimeters, and are of a magnificent yellow color. The fruit is a legume, so it belongs to the botanical family Fabaceae (legumes). It contains blackish and very hard seeds, and they are toxic.

La Cassia fistula is a deciduous tree native to Egypt, the Middle East, and parts of Asia that reaches a height of 6 to 20 meters. Its crown is highly branched, and is made up of large, alternate and deciduous leaves. The flowers are grouped in hanging clusters between 30 and 80 centimeters long, and it also produces legumes that contain dark-colored seeds.

It is popularly known as cane fistula or golden shower, but unlike the Laburnum anagyroides, it is not toxic at all. In fact, it is used as a laxative, astringent and as a remedy for minor bumps.

What are the care that must be provided to them?

The golden shower, both in temperate climates and in warm climates, are plants that take good care of themselves and are easy if the climate is right for them. That is, the Laburnum anagyroides it will look beautiful in temperate regions, where there are frosts; on the contrary, the Cassia fistula it will grow wonderfully whether the temperatures are mild or warm year round.

Let us know what are the basic care that must be given to them:

Both trees they have to be placed outside. It is highly recommended that they get in the sun, at least a few hours a day, but they do reasonably well in places with partial shade.

If we talk about their roots, they do not develop much compared to other plants, but they should be planted at a distance of at least 5 meters from pipes and floors that have been paved.

These trees require water frequentlyTherefore, they must be watered as soon as the earth begins to dry out. This will happen more often in summer than in winter, and even more if the weather is dry and warm, so you have to be vigilant.

If you doubt when to water, insert a thin wooden stick: if when you remove it, it comes out with little or no soil attached to it, then you will have to take the watering can and moisten it. 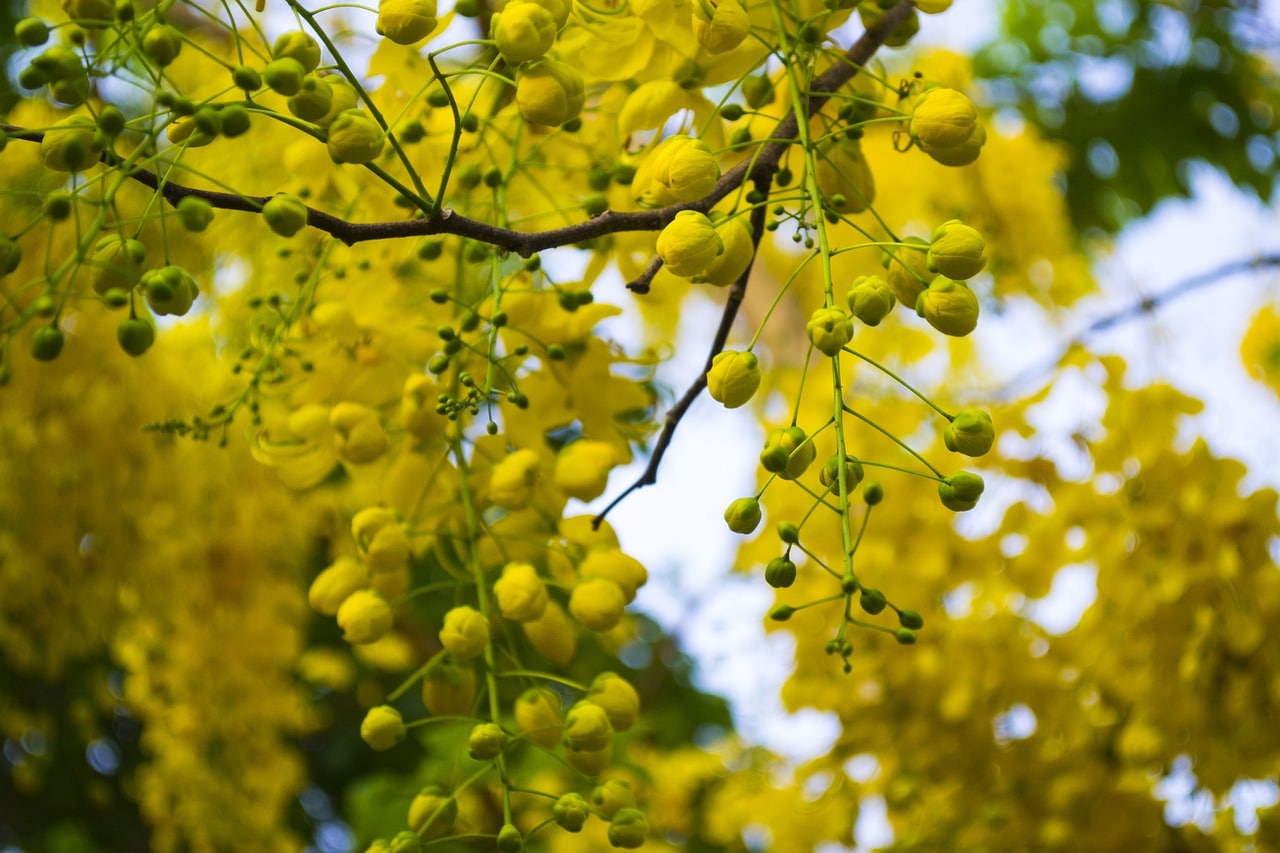 Apart from water, it is advisable to fertilize your golden shower during its growing season, that is, in spring and summer. There are many types of fertilizers on the market, but they can be classified into two large groups: chemicals, such as this, and the organic ones. Both can be very useful if used well, but we recommend using the latter as this helps to take care of the fauna (and flora) in your garden.

Of course, if you use chemicals, or organic ones that are highly concentrated (algae extract or guano, for example), follow the instructions that you will find on the package.

Both Laburnum and Cassia multiply by seed in fall or spring. For that, you just have to introduce the seeds for 1 second in boiling water and 24 hours in water at room temperature (help yourself with a strainer). After this time, put a maximum of two in each seedbed, water abundantly, and in a matter of a few days you will have your own Golden Rain seedlings.

Here we explain how the laburnum are sown:

They do not usually have, except for oidium if their leaves are sprayed / sprayed, or some mealybug in summer.

It depends on the species:

What uses are they given?

Golden shower, both Laburnum and Cassia species, are very pretty plants that are grown in gardens. What's more, you can choose to have them in a pot and go pruning to control their growth. And since they have small leaves, they are also suitable species for bonsai.

But yes, let me remind you that the Laburnum anagyroides It has toxic fruits, so if you have small children or pets, it is not advisable to plant it in the garden.

With regard to the Cassia fistula, it is an interesting plant with medicinal properties.

What do you think?