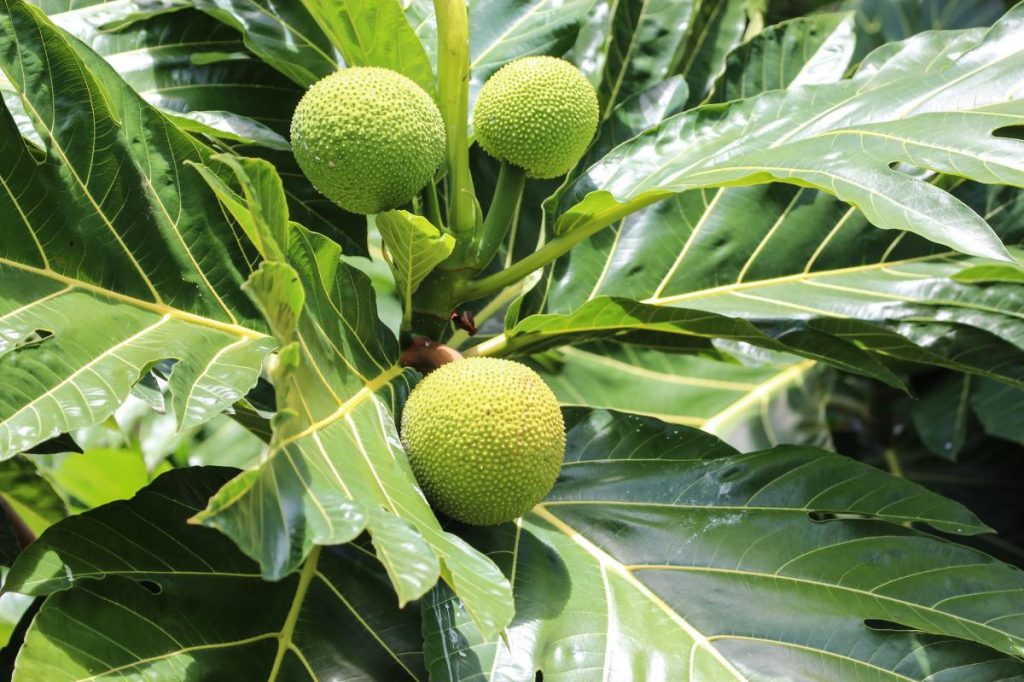 Today we are going to talk about a somewhat exotic fruit that grows in tropical places and whose beneficial properties for health are immense. Is about jackfruit. Its scientific name is Artocarpus altilis and it is known by other common names such as breadfruit or frutipan. The tree from which it comes is known as the bread tree or the poor man's bread. It is a fruit native to the islands of the Pacific and Southeast Asia where we can find it especially in Indonesia and New Guinea.

In this article we are going to know in depth its characteristics and the properties that make this fruit so beneficial for health. Do you want to learn more about jackfruit? Keep reading, because we will tell you everything.

The name of breadfruit is due to the pulp inside looks similar to bread. We can know that the fruit is immature because it remains green. It has a disproportionate size in some occasions and in others something smaller. It usually has a large size and a rounded shape depending on the species we are observing.

The bark is quite thick and green in color when not yet ripe. You could say that it has an external appearance similar to that of pineapple, since when it matures it turns yellow. It is tough on the outside like pineapple but fleshy on the inside.

Its edible part is the interior, the pulp. In general, to eat it it is necessary to peel it and chop it like pineapple. It has a very sweet and addictive taste, quite refreshing. Therefore, it is a widely consumed fruit, not only for its flavor, but also for its properties that we will see later. Depending on the species we are treating, it may have seeds inside.

The advantage that this fruit has over others is that it does not matter how ripe it is at any given time, since it is also used in the kitchen. Its use has spread enormously around South and Southeast Asia. The fruit has a very exotic appearance, not only because of its size, but also because of the texture it has and the color of the rind.

Something that leaves more than one surprised is that, when the fruit is still unopened, it gives off aromas of other fruits such as pineapple, banana, orange, melon or papaya. When the aromas are perceived, it becomes more delicious and appetizing.

Its seeds also have culinary use, so we can consider this fruit quite useful in all its aspects. The seeds They are high in carbohydrates, healthy lipids, and protein. What's more, have high levels of minerals, lignans, saponins, isoflavones and other phytonutrients. To consume them, the seeds are first roasted and used as an alternative to the aroma of chocolate. As for the breadfruit from which this delicious fruit comes, its wood is used to create numerous musical instruments and to make furniture.

It can be said that both this tree and its fruit are almost 100% usable in these places. There is no waste in it.

Now we are going to analyze the beneficial properties for which jackfruit has become one of the most famous fruits in its area. It is used to treat various ailments and pathologies and helps prevent many diseases.

In traditional medicine, jackfruit has been used as an antiasthmatic and antidiarrheal medicine. Due to its properties it can help in the treatment of conjunctivitis and otitis, in addition to the elimination of warts. To do this, you have to make a dissolution that we will see later.

Breadfruit is able to provide us with energy quickly when we consume it given its levels of simple sugars. Thanks to this, many athletes who need a sugar boost during exercise turn to jackfruit. Keep in mind that, although they are simple sugars from fruit, it is not the same as an industrial refined sugar.

This fruit is perfect for preventing many degenerative diseases thanks to its high content of vitamins A and C. It has numerous nutrients and phytochemicals that act as antioxidants and allow our body to eliminate free radicals. These radicals so feared by the population are those that cause premature aging of cells. I think that nobody wants to age before their time, so it is very consumed by these properties.

Breadfruit has a high fiber content in its composition and this helps to improve intestinal transit. Constipation is something that many people suffer and that thanks to the consumption of jackfruit can be alleviated and improved. If consumed regularly, it will not only help with this, but it will also promote better absorption of the rest of the nutrients from other foods.

Due to its high content of vitamin C, jackfruit can promote collagen production so that the skin has a correct structure and stay firm for longer. It is also good for relieving some wounds on the skin.

Thanks to the presence of potassium, jackfruit is used to control blood pressure levels. With its iron content, it helps many people with their anemia. As can be seen, its beneficial properties are many, so its consumption is widespread.

Now we are going to learn how to prepare it to treat some pathologies. As we have said before, this fruit can be used both ripe and green. Also you can make bread, ice cream and jams with this fruit. For some people, it can be used perfectly as a companion to food and to replace rice.

Let's see how it is prepared:

I hope that with this information you can learn more about jackfruit.