El Eucalyptus Globulus is a tree belonging to the family myrtaceae. His name is originally from the Greek (eu-bien and kalipto-cover), something that is related to his flowers, which are protected and only they are seen when their petals open.

The Eucalyptus is native to the Southeast region of Australia and Tasmania and is currently in various countries, both in Europe, South America, Africa and Asia.

What is the environment for the development of Eucalyptus Globulus?

The Eucalyptus Globulus thrives in cool, humid environments, the excessive cold are not good for its development.

However, can withstand high temperatures between -3 ° C to -5 ° C and is that given its water absorption capacity It is a species in controversy, since it is used to clean the swamps of the mosquitoes that transmit malaria and it is also considered a very aggressive species for other ecosystems due to the drying it causes.

Characteristics of the Eucalyptus Globulus

The Eucalyptus Globulus has very diverse characteristics, since some reach great heights and others have the appearance of a bush.

Some eucalyptus they have a single trunk and a smaller crown than their height, others may have a trunk and some branches that grow close to the ground and there are others also that develop several stems, but they are small.

The young stems are usually of a soft green color with pink tints, while in their maturity the trunks  are covered with a crust ranging from pale or grayish green to dark brown. Its roots sink vertically into the ground and can reach up to 10 depth meters.

The Eucalyptus is considered a species that remains evergreen, even though some may lose their leaves at the end of the dry season.

One of his particular characterisitics is the presentation of the heterophilia, that is, in the same tree there is a difference between its young leaves (heart-shaped and opposite) and those of its adulthood that are thick and lanceolate (with a spearhead), these hang down and they can measure up to 30 cm. long.

Your flowers tend to be aromatic and are distinguished from those of other trees, because their petals unite and they form a kind of layer when they expand. They have male and female organs and bloom as adult foliage appearsThis can happen between September and October or between February and July, depending on where you are. Are considered melliferous (producers of abundant honey), which attracts bees and other insects helping to transport pollen, its color is generally white.

Its seeds are protected in the fruit, which is capsule-shaped and it is woody in texture, it can measure between 2.5 and 3 cm in length.

The most common diseases in Eucalyptus They are transmitted by fungi, bacteria and pathogens that attack their roots, stems and leaves. Likewise, there are insect pests, moth caterpillars and ants that also cause damage to them. 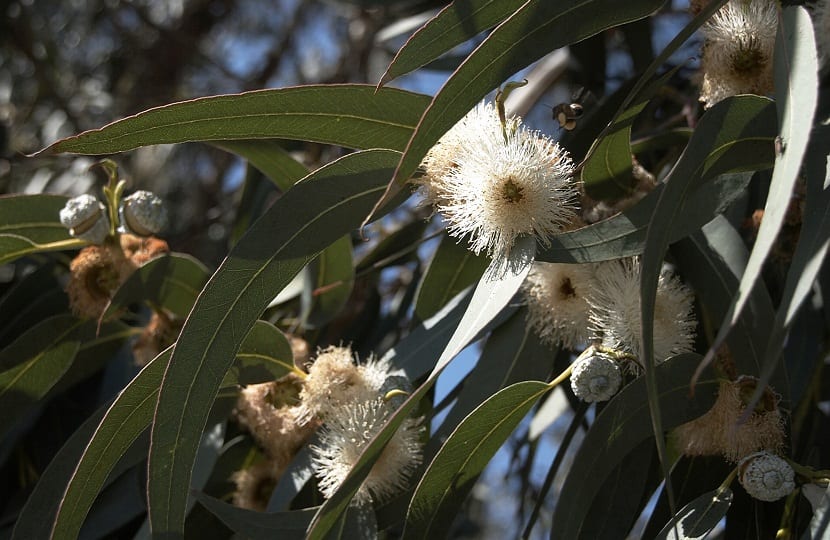 In the middle of the XNUMXth century, the Eucalyptus Globulus or also known as the White eucalyptus, from Australia. It was introduced by the priest Rosendo Salvado, who had a family in Tuy and whom sent them the seeds for ornamental purposes.

El Eucalyptus Globulus was of great importance in postwar Spain (approx. 40 years) since the reforestation to acquire raw materials and create jobs. The largest repopulations were carried out in the 60s / 70s and the areas where they started with the eucalyptus Globulus were on the Cantabrian Coast, Galicia and the southwest of the peninsula since the (Eucalyptus camaldulensis or red) was planted in Huelva, Badajoz, Seville and Cádiz.

East was considered an invader because it is a foreign species and its crops are monospecific, that is, it is a single product and it is grown in a single waya.

Among the arguments used by his detractors is the fact that threaten native forest formation, since it monopolizes all the nutrients in its environment, leaving neighboring species without the possibility of survival. What's more, are considered harmful for the conservation of fauna and flora, as well as for the management of water resources.

These are pyrophytic trees (fire resistant), which favors its expansion and in turn causes concern about the speed with which its flames spread, which on some occasions have exceeded 300 meters in height.

However, environmentalists and scientists agree that the problem is not in the tree but in forest management policies that is done. In the same way, they consider that the utility obtained both in the industrial and commercial fields is indisputable.

Full path to article: Gardening On » Plants » Main characteristics of the Eucalyptus Globulus