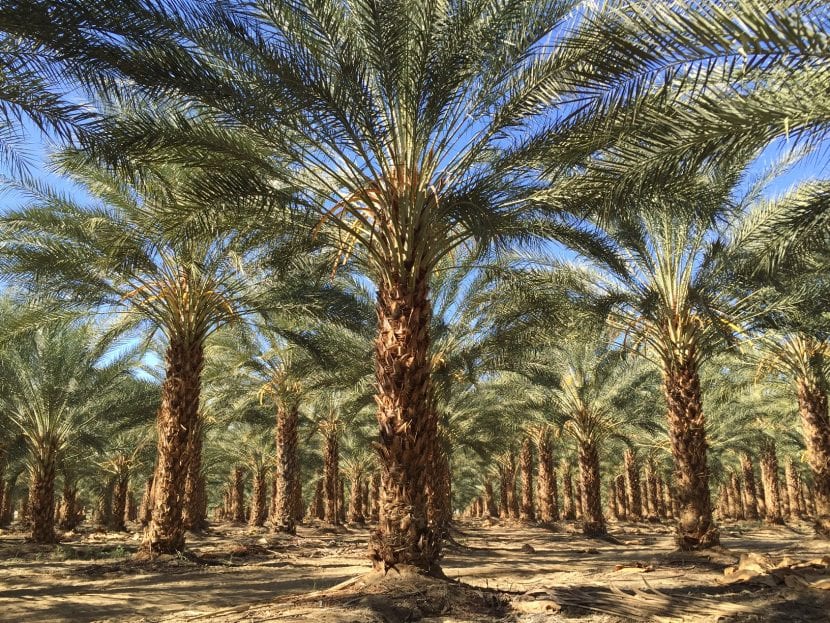 Palm trees are the kind of plants that you never tire of looking at. Their slender trunk, crowned by leaves that can be pinnate or fan-shaped, have made them one of the most popular. But if we had to say which is the most important species for humans, surely many of us would say the Phoenix dactylifera, much better known by the name of date bank.

It has a reasonably fast growth rate, gives a light but pleasant shade and, the most interesting thing, is that it not only withstands drought but is a plant that, practically, she can take care of herself if it is planted in the ground. For all these reasons, we are going to dedicate a special article to it.

Origin and characteristics of Phoenix dactylifera

La Phoenix dactylifera, which receives the name of date, támara, phoenix, date palm or common palm, is native to Southwest Asia and North Africa, and naturalized in the Canary Islands. It is characterized by reaching a height of up to 30 meters, and a trunk thickness between 20 and 50cm in diameter.. Its leaves are pinnate, spiny, between 1,5 and 5 meters long, composed of 10-80cm long leaflets, of a glaucous color.

The flowers are grouped in highly branched, erect inflorescences that emerge from brown spathes between the leaves in spring. The fruits, produced by specimens 12-15 years old, are oblong-ovoid berries 3 to 9cm long., orange at the beginning of its development and red-chestnut when it finishes maturing. Inside there are sub-cylindrical ellipsoidal seeds of 2-3cm by 0,5-1cm.

Its growth rate is fast, growing about 30-40cm per year. What's more, their life expectancy is very long, up to 300 years.

What care does the date palm require?

Would you like to have a date palm in your garden? If so, take the following care:

It is a plant that has to be placed in a sunny exposure. As it has thorns, it is very important not to put it near the areas of passage, since we could hurt ourselves a lot.

Doesn't need a lot of water. During the warm months, two weekly waterings will be necessary, and the rest of the year one a week will be enough.

From the beginning of spring to the end of summer / beginning of autumn, it is highly recommended to pay it with Organic fertilizersLike guano or manure. Also, We can add the egg and banana peels, the tea grounds,… I have a friend who fertilizes his palm trees even with the leaves of vegetables that are no longer edible, and I have to say that they have an impressive garden.

Of course, if we are going to have it in a pot, we must use liquid fertilizers to avoid hindering the sewer system of the water.

It is not demanding. It can grow in all types of soils, regardless of whether they are limestone or sandy.

During spring, when the risk of frost has passed.

If we want to have a free copy of a date palm, we will only have to walk through one of the streets of our city or town and pick some dates. Another option we have is to buy them in a supermarket or organic greengrocer.

As soon as we have them, We will remove the shell and clean them thoroughly with water. Then we will sow them in a hotbed (pot, glass of yogurt, milk container, ... whatever we have closer to) with universal culture substrate mixed with 30% perlite, and water.

The date palm is one of the few palms that produce suckers. These we can separate them from the mother plant during spring, or autumn if we live in an area with a mild climate. To do this, what we will do is dig trenches about 40cm deep around the sucker we want, and then we will separate it with a small hand saw previously disinfected with pharmacy alcohol.

Finally, we will impregnate the base with rooting hormones, we will plant it in a pot with a growing medium and we will water it.

If all goes well, it will emit new roots after 1-2 months.

If overwatered, fungi can appear, such as Phytophthora, which causes root death. To prevent it, should be watered occasionally, and never wet the leaves.

What is the Phoenix dactylifera?

The date box has several uses, which are:

What are its medicinal properties?

The liquid that is extracted from the fruits of the date palm, used as an emollient, used to treat diseases of the respiratory tract, like the cold. If we don't like the taste, we can soak them with warm milk.

The palm grove of Elche

In Spain we are extremely lucky to be able to enjoy several palm groves. Among the most popular are the Palmetum of Santa Cruz de Tenerife, where tropical and subtropical species grow, and another is the Palmeral de Elche (Valencia). Declared a World Heritage Site by UNESCO on November 30, 2000, it is the ideal place to enjoy the beauty of several palm trees, especially date palms.

There, we can also see the Imperial Palm, a name that was given as a tribute to Empress Isabel de Baviera, who visited the Huerto del Cura complex in 1894.

Do you like date markets? If you want to have one, do not hesitate to visit a nursery. Surely you will find it there 😉.

Full path to article: Gardening On » Plants » Palms » How to care for the Phoenix dactylifera or date palm