Trees have the ability to amaze us. By dedicating the first years of their life to growing and strengthening, once they reach adulthood they become impressive specimens. Some are taller than others, some are deciduous and some are evergreen, but they are all plants whose beauty is extraordinary.

On this occasion we are going to pay a small tribute to them, to these precious plants that form the structure of forests, jungles, jungles, ... and also gardens. Enjoy these tree photos while you learn more about them.

What is a tree?

A tree is a perennial plant, that is, it lives for several years (there are some, such as the sequoia giganteum, which can live up to 3200 years - far longer than any animal). Its stem is woody, and branches at a certain height from the base. Depending on the climate and its own evolution, it can be maintained always green, that is, we will always see it with leaves, although in reality the older ones fall off as new ones come out, or deciduous, which means that it loses its leaves in some season of the year (summer or autumn) and then, when conditions improve, produce new ones again.

How many trees are there in the world?

Según un study conducted by Yale University, published in the journal Nature, it is estimated that there are around 3 million trillion trees, which is about 422 per person. They may seem like a lot, but the sad reality is that the growth of the human population is seriously affecting them since 15.000 million copies are lost every year.

What are trees for?

Trees are very important both for the ecosystem and for humans. Among its many qualities, we highlight the following:

Here are 5 examples of impressive trees:

Adansonia digitata, a tree that loses its leaves during the dry season.

The Baobab, also known as the monkey bread tree, is a tree native to the semi-arid areas south of the Sahara, in Africa that grows to reach the 25 meters high and whose trunk can have a diameter of 40m. Its flowers are hermaphroditic, so it can self-pollinate.

Its growth is very slow, but this has an advantage, since it allows it to live for many years: 4.000.

Brachychiton rupestris, an evergreen tree whose bottle-shaped trunk draws a lot of attention.

We could call this the Australian Baobab, although of course it would have nothing to do with it 🙂. It is a tree whose trunk is very striking. It can reach a height of 12-14 meters, having at maturity a more or less pyramidal bearing, so that provides a very good shade.

Su growth rate is slow, but it is important to bear in mind that it is a plant that needs a lot of space to develop, being advisable not to plant it at a distance of less than 6m from walls or other tall plants.

Ficus benjamina, a beautiful evergreen tree that has a 7-8m crown.

El Ficus benjaminaKnown as the Benjamin Tree or Small Leaf Ficus, it is often used as an indoor or terrace plant; however, its best place is the garden as it is a plant that takes up a lot of space. It grows to a height of 10 meters, with a crown of up to 8 meters, so it is excellent to have as an isolated specimen.

Its growth rate is fast, and it must be said that, like all Ficus, its roots are strong enough to break pipes and lift soil.

Tabebuia rosea, a beautiful tree with pink flowers that beautifies any place.

This lovely tree grows to a maximum height of 30 meters, being usual that it stays between 15 and 20m. It behaves as a perennial, deciduous or semi-mature depending on the climate: if the temperatures remain more or less mild and it rains regularly, you will see it evergreen; but if not, you can drop some or all of the leaves.

Su growth rate is fast, so in a few years you will be able to have a very interesting specimen.

Sequoiadendron giganteum, a giant that can live 3200 years.

The Giant Sequoia is the largest plant in the world in terms of sum of volume. It grows to a height between 50 and 85 meters, and measures between 5 and 7 meters in diameter. It remains evergreen, and it is spectacular.

Its growth is very slow, but like the Baobab, it can live for thousands of years; specifically, 3200.

Finally, we leave you with some photos of trees:

A black and white photo of a tree calmly watching a storm. 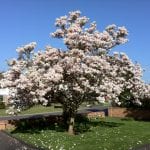 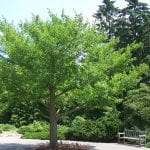 If you want to know more about these magnificent plants, Click here.