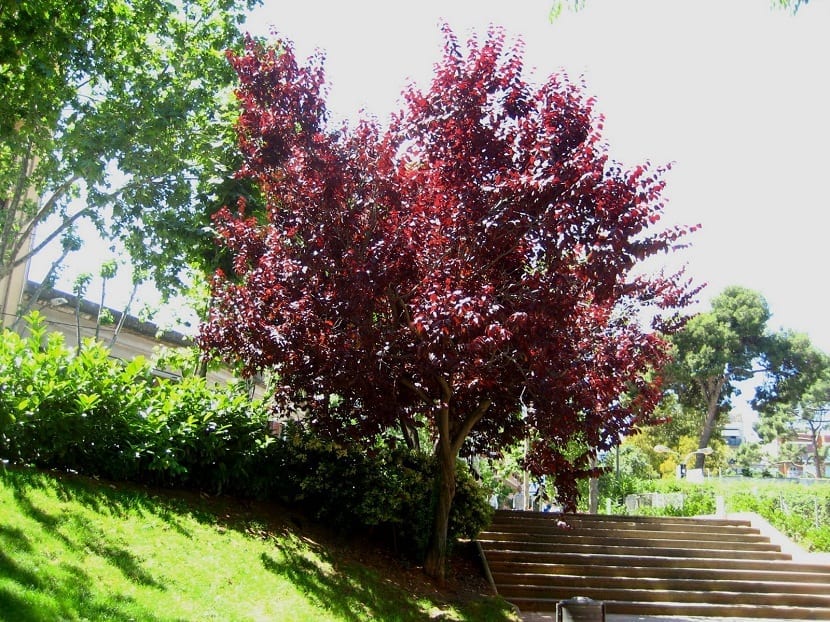 The Prunus cerasifera pissardii also called red plum or garden plum, is a small deciduous tree (it is part of the same genus which includes cherry, peach and almond trees) of ornamental origin, which is a native variety of Persia, from the species that makes up the subgenus Prunus. 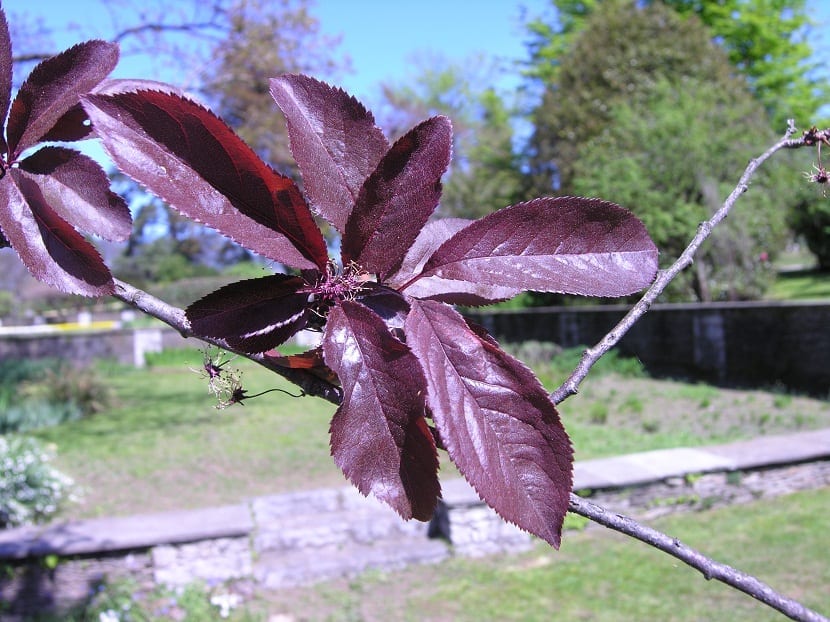 This plum is a tree that is characterized by being quite decorative, since it has a purple-red and purple-brown foliage, which offers the opportunity to add pleasant color contrasts within the garden.

It has a white bloom that is born on top of a bare branch, so it has a great attraction.

It must be said that Prunus cerasifera pissardii is an ornamental plum, so it does not offer a production of edible plums. As usual blooms prior to the appearance of foliage, when it is completely covered by small and abundant pinkish flowers.

It also has a shiny bark of a reddish hue which turns out to be distinctive of the genus Prunus.

Prunus cerasifera pissardii has the ability to grow to a height of approximately 8 meters and a width of 4 meters. It has a particular spherical shape and has an immense ornamental appeal due to its beautiful flowering in white and / or pale pink tones, to which you have to add the original color of its foliage and that allows you to create extraordinary contrasts.

It has simple, elliptical, deciduous and serrated-edged leaves, which belong to a foliage of a dark red tone, which, as mentioned above, is ideal for creating contrasts in gardens.

It also has a rounded cup that it looks a bit messy with numerous branches.

It produces flowers of a pinkish tone, which have a width of around 2-3cm. Its flowering is usually more abundant when winter ends, giving rise to small pentameric, actinomorphic, hermaphroditic and mainly solitary pink flowers that sprout before their leaves do.

Furthermore, the Prunus cerasifera pissardii It offers fruits that lie in drupes of a dark red tone.

It needs to be planted in a place where it can get enough sunlight and where it can enjoy deep soil and that has good contributions of organic matter. And although it is a plum variety capable of withstanding cold climates and strong frosts very well, the truth is that it is best not to expose it to late frosts, since it does not support them at all.

In the same way, it can be said that by correctly supporting moderate droughts and high levels of pollution, it turns out to be an ideal type of plum to grow in large cities.

It is a species quite sensitive to pruning, so you only have to carry out light pruning and annually, preferably in the time when autumn begins, in order to promote adequate healing of the cuts.

And because it blooms on old branches that are more than two years old, it is usually best to lighten the old branches at the time of maintenance pruning, which in turn will promote their flowering.

Light training pruning is necessary while the garden plum is in its early years of life. and a gentle maintenance pruning annually when it is formed.

It is also necessary to know that although they are not really demanding with the soil, it is usually best to grow them in slightly clayey soils that have proper drainage and a good content of organic matter.

It is enough to apply fertilizer once a year during the spring, always preferring organic matter fertilizers such as compost, humus and / or manure.

They are also small trees that have great resistance, so it is not common for them to be affected by diseases and / or pests, although in general, they experience problems with aphids, rust and mealybug, which are very easy to treat.

The most efficient way of multiplying is through reed graft propagation carried out in early spring and / or by bud grafting on the various varieties during the summer period.

Likewise, it is possible that its reproduction takes place through cuttings during the beginning of summer.

The ornamental uses of Prunus cerasifera pissardii are usually varied, so can be used as shade trees and as decorative elements both in alignments, as in solitaires.