Rare succulents, that is, cacti and succulents that have curious shapes and / or colors, are those that quickly become our favorites, and therefore often our "spoiled ones" as well.

In a composition they can be very beautiful, but growing them in individual pots makes them look in all their splendor. The beauty of rare succulents is such that it is almost better if you see it for yourself.

They could pass for small gemstones, but fortunately the Adromischus marianae is the scientific name for a real plant, which grows wild in South Africa. Actually it is a small subshrub, about 10-15 centimeters tall, with almost spherical leaves, green, reddish brown or purple. The flowers arise from a flower stalk, and are green, and small as they measure 1,2 centimeters.

In cultivation it is a relatively easy plant, which will be healthy only if it is kept in substrates that drain water quickly, and is watered from time to time. 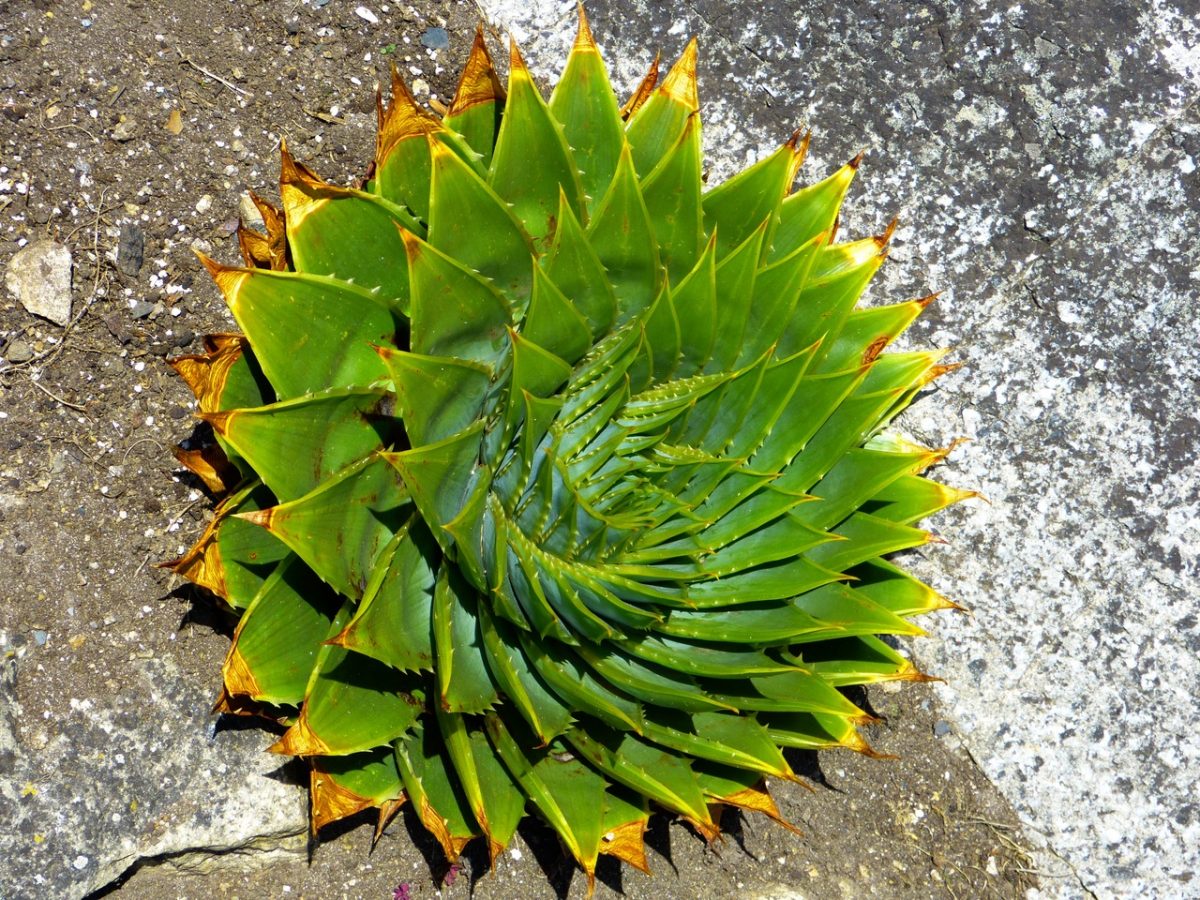 El Aloe polyphylla, known as spiral aloe is a rare but precious species. Originally from Lesotho (Africa), its fleshy leaves, more or less triangular, are arranged in a spiral creating up to five levels. These are grayish-green in color, and have some very short spines.

When it blooms, its ornamental value increases even more, since tubular and reddish flowers or sometimes yellow in spikes sprout from its center. Unfortunately, in cultivation it is very demanding, and it must also be added that it is in danger of extinction, so it is difficult to achieve it.

El Ariocarpus furfuraceus it is a cactus that seems to come from another world. And is that it does not have ribs as such, but these are long tubers with a triangular shape that are arranged in a spiral. Thus, it forms a globular structure, of a light bluish-green color, that can measure a diameter of 16 centimeters and a height of 10-15 centimeters.

The flowers sprout from the tubers that are closest to the center of the plant, and are between 4 and 5 centimeters long. These are white or pink.

El Aztekium hintonii It is a species of cactus native to Mexico known as gypsum stone biznaga. Its body is semi-globose, green in color, with a height of 10-15 centimeters and a similar diameter.. It is made up of 10-15 very marked ribs, from whose areolas sprout 3 very short spines that are hardly visible to the naked eye. The flowers sprout at the top, and are pink, with a diameter of 1 to 3 centimeters.

It is a species that grows in rocky terrain, so when it is grown it is important that it be kept in substrates such as pomx, akadama or similar to minimize the risk of rotting.

There are a few species of conophytumBut C. obcordellum it is without a doubt one of the favorites. Like lithops, it is a »window plant» composed of two leaves, in this case united, in the center of which they present a fissure from which the flowers sprout, which are yellow, and the new leaves.

It grows wild in South Africa, and its height is only 4 centimeters. If they are combined with other small succulents they can look very curious.

El Ferocactus schwarzii is a species of cactus belonging to the genus Ferocactus originally from Mexico. It has a globular body with 13-19 well-armed ribs with spines between 1 and 6 centimeters long. Its flowers are yellow, about 4 centimeters in diameter, and sprout at the top of the stem.

Its cultivation in rockery is very interesting: the plant measures 50 centimeters in diameter by 80 centimeters in height, so that it will be great if it is combined with, for example, other cacti and / or succulents.

It is a very rare variety of Lithops. It comes from the selection of copies of Lithops optic, which is an endemic species of Namibia, which they have lilac leaves. It blooms in spring, producing white flowers that sprout from the center of the plant.

The total height is about 3-5 centimeters, so it is the ideal succulent to have in small pots. Its growth rate is slow, but luckily you can find adult plants in cactus and succulent nurseries at relatively inexpensive prices.

El Tephrocactus geometricus It is a cactus that attracts a lot of attention. It is endemic to Argentina, and It is characterized by developing a very little branched stem, in the shape of a tuber, which measures a maximum of 15-20 centimeters high. It has spines, but only on the top of each segment, and they are black and white in color with a length of up to 1 centimeter.

The flowers, which are white, sprout at the end of the upper stems, and are 3-4 centimeters in diameter.

What do you think of these rare succulent plants that we have presented to you? As you can see, there are a few that are wonderful, but which one did you like the most?