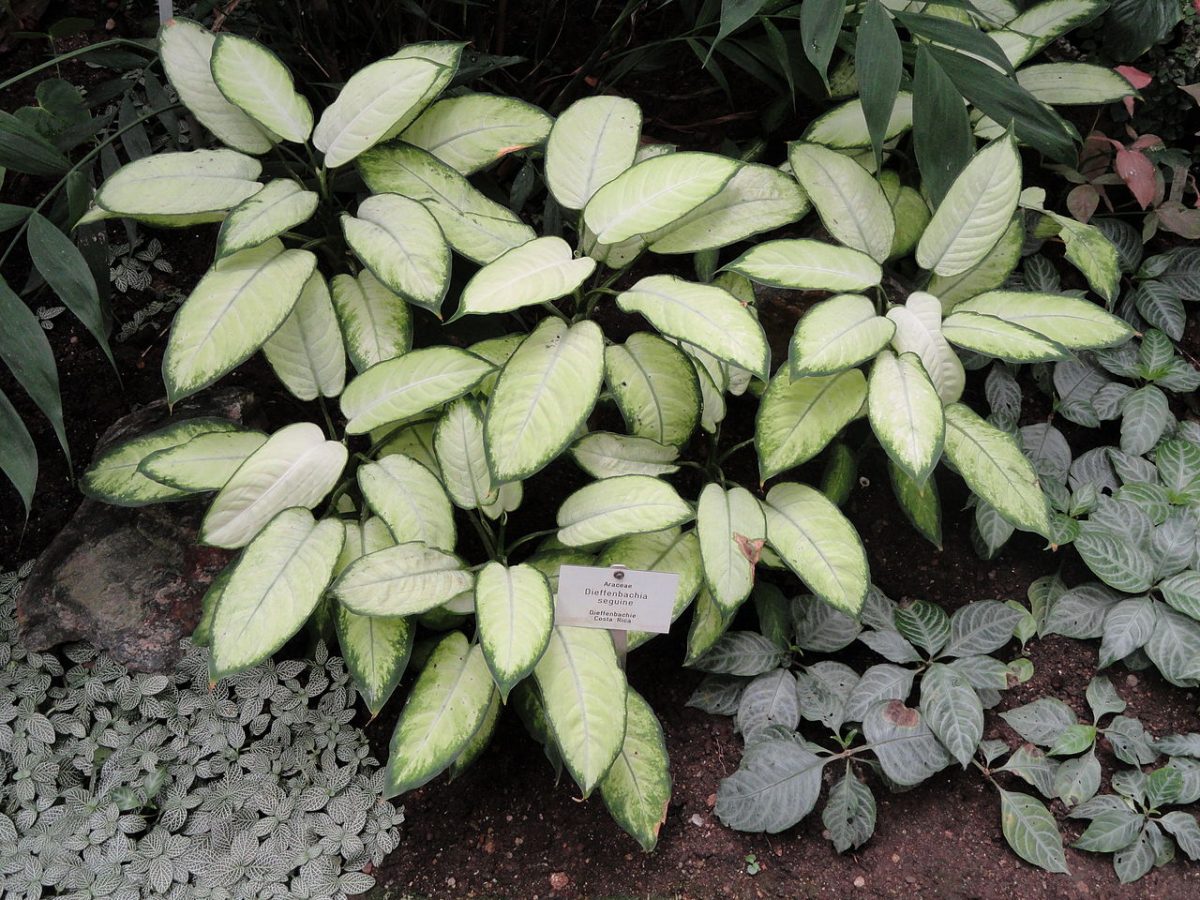 Our Dieffenbachia They are very popular indoors, as they tolerate lack of light well and are ideal for those who do not have much experience in the maintenance and care of plants. Its leaves are very ornamental, and each variety has its own "pattern", but the cultivation requirements are similar for each of them.

Decorating with them is really easy, since they are not very demanding, and they can even live in pots for their entire lives. But, How are they cared for?

Origin and characteristics of dieffenbachia

It is a genus of perennial plants native to the jungles of Central and South America. They grow to a height of between 2 and 20 meters depending on the species and the place of cultivation, and have an erect stem from which oval or lanceolate leaves, dark green or variegated, sprout.

They are popularly known as lottery, galatea, or of course dieffenbachia.

Is it a poisonous plant?

If an adult chews the leaves for example, as they contain calcium oxalate crystals, they will have burning and redness that in principle will be mild or moderate. You will only require urgent medical attention if you are a particularly sensitive person, or if you are a child, since in these cases the symptoms are serious: shortness of breath, drooling and / or severe sore throat. Treatment for them will be with activated charcoal, analgesics and / or antihistamines, depending on the severity of each.

However, if there are children and / or pets at home, it is not recommended to have dieffenbachia, unless it is placed in an area inaccessible to them.

About 30 different species are included in the genus Dieffenbachia. All of them are very toxic, but not for that reason they are cultivated less than others; in fact, they are one of the plants that are most cultivated indoors as they tolerate low light conditions. Now, which are the most popular?

La Dieffenbachia amena It is the species of the genus that has the largest leaves: they can measure 30 centimeters or more in length. It receives another name and is Dieffenbachia tropic, referring to the Dieffenbachia amoena 'Tropic Snow'. Previously it was called Dieffenbachia bowmanii, and is native to Brazil. It can reach a height of about 50 centimeters in a year, and reach one and a half meters in height even in a pot.

Dieffenbachia 'Camilla' is a variety. Its full scientific name is Dieffenbachia amoena var »Camilla». It is a medium-sized plant, with stems that reach 30 to 40 centimeters, and with green and white leaves. We could almost say that it is one of those with the whitest foliage of all, a feature that greatly embellishes it. 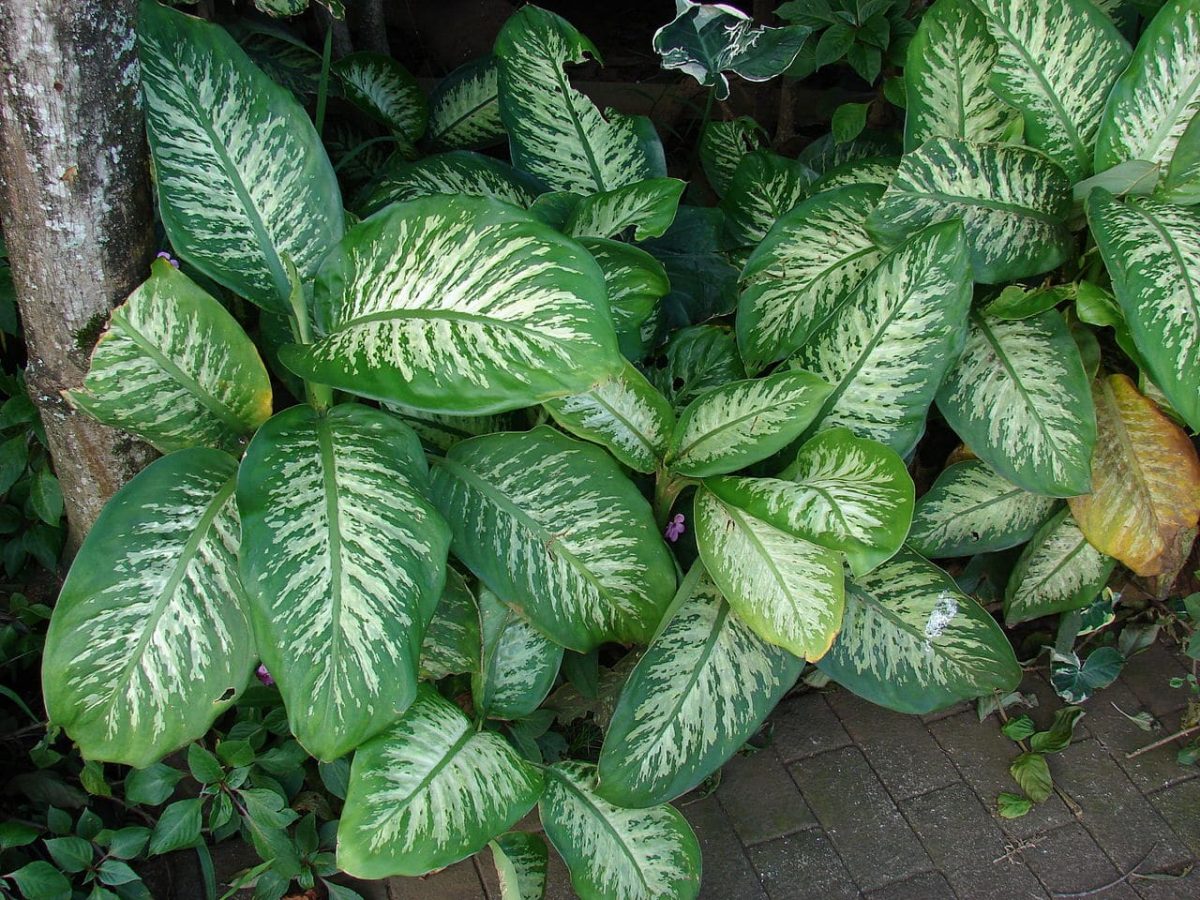 La Dieffenbachia Seguine It is a species that used to be called Dieffenbachia maculata. It is native to Mexico, Central America, the Antilles and northern South America reaching as far as Brazil. It grows between 1 and 3 meters in height, and its leaves are yellowish green with a green margin.

What are the care it requires?

If you dare to have a copy, we recommend that you provide it with the following care:

It is a plant sensitive to excess water, as well as drought. To avoid problems, it is highly recommended to check the humidity of the soil or substrate, either by inserting a thin wooden stick, digging a little or weighing the pot once it has been watered and again after a few days.

If you doubt, it is better to wait a few days. Anyway, depending on the weather and your location, It is watered an average of 3 times a week in summer and an average of 1-2 a week the rest of the year.

Use rainwater, or water without lime, since otherwise the leaves could present chlorosis.

To avoid chlorosis, it is recommended to fertilize the plant with a specific fertilizer for acidophilic plants (on sale here!) during the growing season (spring to early fall).

It is also highly advisable to fertilize with organic fertilizers, such as guano, to ensure that the plant grows healthily.

Time of transplantation or planting

When planting them in the garden, it is advisable to mix the soil on the ground with a little organic compost (such as worm castings for example). This will ensure rapid adaptability and optimal growth. 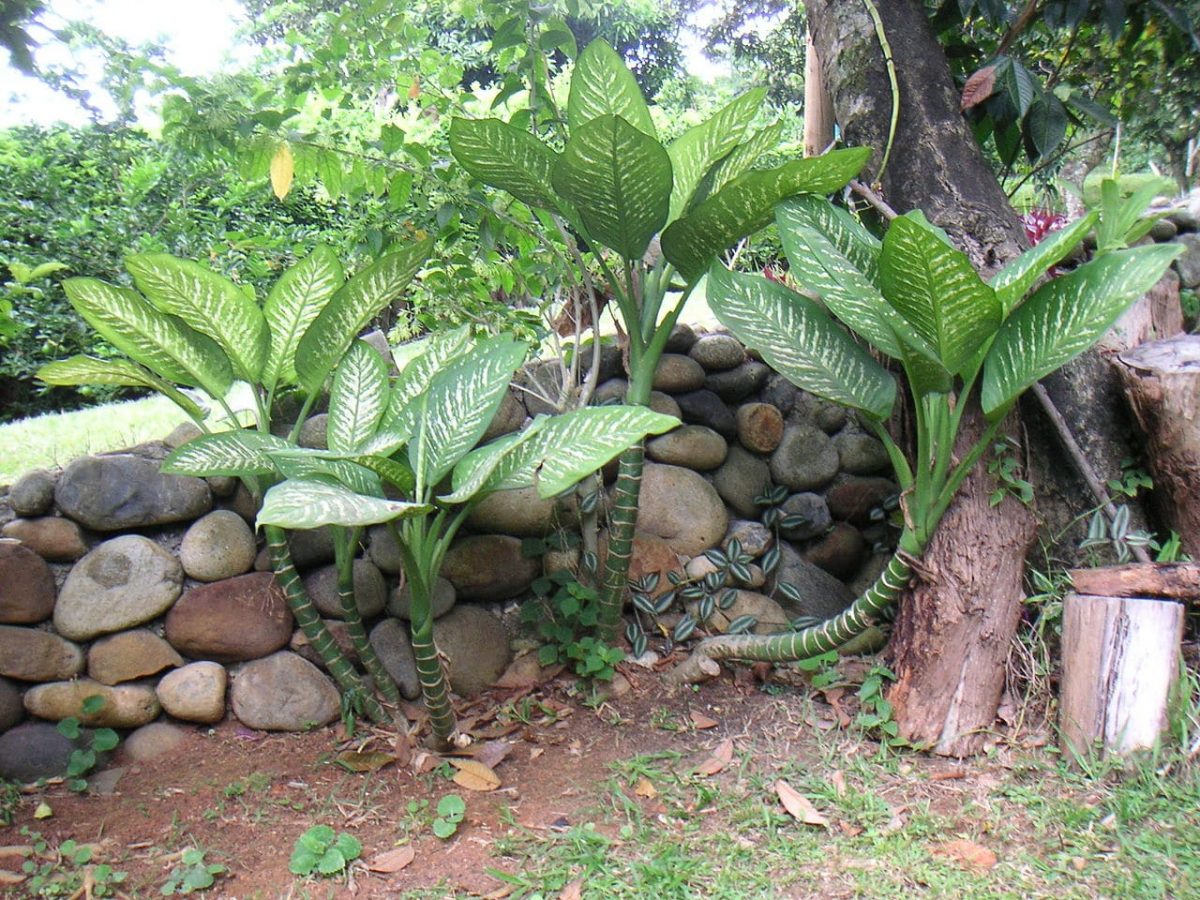 Don't need it, but you can remove the dry, diseased and weak leaves whenever you consider it necessary.

In the event that you have it indoors and it is reaching the ceiling or is close to it, prune it at the end of winter. This will bring out lower shoots.

It can be affected by Red spider, cochineal, aphid y trips. They are treated with specific insecticides, or if the pest has not spread much, with a cloth soaked in pharmacy alcohol. Diatomaceous earth will also work for you (for sale here!) or the potassium soap.

In humid environments, or when you are suffering from excessive watering, fungi will cause leaf spots, and / or stem and root rot. It is treated with systemic fungicide (for sale here!).

It does not resist cold or frost. The minimum temperature that it supports is 10ºC.

There are a series of problems that usually arise, especially when grown indoors, and they are:

Leaf and / or stem burns

The dieffenbachia plant is not one that tolerates the sun or direct light. Because, It is very important to put it a little protected from the star king, because only then can we get it to grow well. In addition, it is not a good idea to have it next to the window, since it would also burn when the magnifying glass effect occurs.

To know for sure if this or another problem happens to you, we will have to look at where those spots have appeared. For example, if the plant is indoors, the burns will appear in the part that is closest to the window. A burnt dieffenbachia, as long as the problem is mild, will remain green and growing with only a few brown spots on a few leaves. The situation is different if it has suffered a lot: in these cases it is best to cut your losses, put it in the shade and wait.

Leaf loss can be a sign that something is wrong with you, but it won't always be the case. It will depend a lot on which leaves are shedding from the plant:

In any case, it is important to clarify something: when we speak of loss of leaves we mean that these leaves can no longer continue to fulfill their function, for whatever reason, and therefore dieffenbachia can no longer "count on" them .

And this is a plant that, unlike others, it does not come off its dead leaves immediately that they are uselessIf not, first stop feeding them (that's when they turn yellow) and then brown. To prevent infections, the ideal will be to cut them as soon as they lose their natural color.

If the tips of the dieffenbachia leaves are brown, it may be because the air is very dry. This plant lives in tropical jungles, where the humidity is high. For this reason, when they are kept in places where the environment is dry, whether indoors or outdoors, the leaves are the first to have a hard time. Now, this is not the only reason.

When we put it very close to a wall or in an area where we pass frequently, we also risk that it ends up with the edges of some leaves (those that are closest to the wall and / or people when they pass through its side) brown. Therefore, we have to do several things:

The yellowing of the leaves is almost always due to a problem with watering. Dieffenbachia needs moderate watering, but it is important not to add more water than it needs, otherwise it would have problems.

To know if we are watering little or a lot, we have to look at the symptoms:

Well, if we are watering more, we must suspend the watering. It is also recommended that, if it is in a pot, we remove it from there and wrap the earth bread with double-layer absorbent paper to absorb moisture. In the event that we see that it gets soaked right away, we will remove it and put a new one, and we will leave the plant like that for about 12 hours, in a dry and protected place. After that time, we will plant it in a new pot with universal substrate mixed with perlite in equal parts, and we will treat it with fungicide to prevent infections.

By contrast, if we have a dry diffenbachia, what we will do is water it thoroughly. If it is in a pot, we will take it and put it in a basin of water for half an hour to rehydrate. This will also help the land to regain its ability to absorb water.

Get it from here:

What did you think of Dieffenbachia? Do you have at home?

Full path to article: Gardening On » Plants » Inside plants » The popular Dieffenbachia