Prunus are a genus of trees and shrubs that are used both for decorating a garden and for gardening. There are a number of species that are frequently cultivated in temperate climate regions, as they resist low temperatures very well. In addition, its flowers are very beautiful: the vast majority of them are white, although there are others that are pink or reddish, they can even be single or double (that is, with a double crown of petals).

Its size does not leave anyone indifferent either, since we are talking about plants that can be very elegant, as they develop a straight trunk and a wide and rounded crown. Its crown provides a cool shade during the summer, so it is interesting to protect yourself from the sun under its branches. Therefore, if you are not sure which one to plant, Next we are going to tell you the types of Prunus, fruit trees and ornamentals, that are most cultivated.

First we are going to talk about the types of fruit Prunus; Not surprisingly, they are the ones that, as their name suggests, produce edible fruits. They are as follows:

The apricot, also called apricot, is a small tree that grows between 3 and 6 meters in height. Its fruits are rounded drupes that measure 3 to 6 centimeters in diameter. These have yellowish or orange skin, and velvety. Depending on the variety, are harvested from late spring to mid-summer; and they can be eaten raw.

El cerezo It is a fruit tree that reaches a maximum height of 30 meters, with a straight and ringed trunk whose bark is reddish in color. Its fruit is a red or dark red drupe 1 centimeter in diameter that finishes ripening in mid-spring.. Once collected, you can consume them as is (except the seed, which appears to be very hard, is poisonous), or use them to make jams.

El tart cherry It is closely related to the sweet, but its fruit has a more acid flavor, and is shorter. It is a tree that reaches 10 meters in height at most, and its cherries are red almost black. It has the same uses as Prunus avium.

El plum tree It is a fruit tree that reaches a height of 7 to 10 meters. The flowers are, as in most Prunus, white, and sprout early in spring. In general, plums are harvested in summer, although there are some early varieties that are harvested towards the middle of spring. These are consumed fresh or dried. They are also widely used to make jams and juices.

The mirabelle, also called rattlesnake or rattlesnake, is a variety of Prunus domestica. The main difference is the skin of the plum, which is more orange.. With these fruits, desserts and alcoholic beverages are prepared, such as mirabelle brandy, which is typical of the French region of Lorraine.

The wild plum, known as greater blackthorn or damascene plum, is a small tree that reaches 6 meters in height. Its fruits are green or purple and measure about 3 centimeters in diameter.. These are widely used in the preparation of jams, compotes and liqueurs.

El almond It is a deciduous tree that can reach 10 meters in height, but in cultivation it is rare to find specimens that exceed 5 meters, since it is pruned so that the collection of the almond is more comfortable. Its flowers are white, and its fruits ripen towards the end of summer (Although the green ones, called almendrucos, also taste good). These are eaten fresh, or they are included in recipes for pastry desserts (usually sponge cakes), ice creams or even vegetable milks.

El apricot japanese, also called Chinese plum, is a deciduous tree that reaches 8-10 meters in height. Its flowers are white, pink or red, and appear in spring. Its fruits are round, red when ripe, something they do in summer. These can be eaten raw.

El peach or peach tree It is a deciduous tree or sapling that reaches a height of 6 to 8 meters. It blooms in spring, producing pink flowers that powerfully attract attention. There are early and late varieties: the first mature in mid-spring, and the others in late summer / early autumn.. Once collected, you can make them desserts, jams, or eat them raw.

El chinese plum, or Japanese plum as it is also called, is a fruit tree about 10 meters high that produces white flowers in spring, and fruits in summer. These are drupes about 4-7 centimeters in diameter and have lilac or reddish skin. When they mature, they are eaten fresh, although they can also be dried.

The blackthorn is a deciduous and thorny shrub that reaches 4 meters in height. It is a plant that, if allowed to grow on its own, tends to become entangled. For this reason, it is advisable to prune it to clear the trunk and to form a more or less rounded crown. Its fruits are collected in late summer / early autumn, and with them you can prepare jellies or jams. Liquors are also prepared with them, such as pacharán.

Now let's look at the ornamental Prunus, that is, those that we would plant in a garden or have in a pot simply because they are pretty:

El African Prunus it is an evergreen tree that can reach 25 meters in height. It has an open crown, with slightly hanging branches, and green leaves. Its flowers are white, and they sprout in spring.

El garden plum It is a large shrub or deciduous tree that reaches a height between 6 and 15 meters. Its leaves are green and its flowers are white. These sprout in early spring, often before other trees do. And although it is used to decorate, its fruits are edible: they ripen in summer and are sweet.

The red-leaved plum is a variety of Prunus cerasifera which has reddish leaves. It is the one that is most planted in gardens since it is ideal for creating areas of special interest. 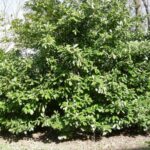 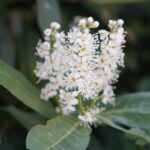 El cherry laurel it is an evergreen tree that reaches a height of 8 meters. Its leaves are oval, of a glossy dark green color, and it produces flowers in white clusters. The entire plant is poisonous, except for the fruits, which resemble cherries. 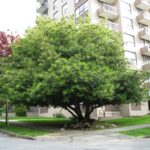 El laurel in Portuguese, also known as lauroceraso de Portugal or parrot, it is an evergreen tree that reaches 15 meters in height. Its leaves are oval, about 12 centimeters long, and have a glossy dark green upper surface and a light green underside. The fruits are drupes that, when ripe, measure 8-13 millimeters in diameter and are black.

Also known as marel or cherry, it is a deciduous shrub that reaches 5 meters in height. Its flowering is spectacular: in spring, its branches are filled with numerous white flowers that sprout in clusters. It produces fruits similar to cherries, but they have a bitter taste.

El japanese cherry It is a deciduous tree that reaches a height of 6-7 meters. It has a wide crown, about 3-4 meters in diameter. Its flowers are pink and sprout in spring. It is widely used both in gardening and landscaping and in the world of bonsai.

The "Kanzan»Is a variety of Prunus serrulata very decorative. ANDThis one has a cup that, in spring, fills with flowers with a double crown of petals which are pink.

Which of these types of Prunus did you like the most?

Full path to article: Gardening On » Plants » Trees and shrubs » Types of Prunus