How many types of trees are there in Spain? The truth is that many. This is a fortunate country in this sense, since there are different climates, all temperate, but some are warmer, others colder; in some areas it rains frequently, in others, on the contrary, the dry periods are the protagonists,… All this makes the variety of native plants very wide and diverse.

But, how could it be otherwise, trees are the type of plant that has been and is used the most. So that, we are going to meet the most popular species of trees native to Spain.

It is an evergreen conifer whose scientific name is Abies alba. It has a pyramidal bearing, reaching a height of 20 to 50 meters. Its trunk is straight and columnar, with a diameter of up to 6 meters. Its leaves are linear, not sharp, 1,5 to 3 centimeters.

In Spain it grows in the Pyrenees, at an altitude between 700 and 2000 meters above sea level.

His scientific name is Ceratonia siliquay it is an evergreen species up to 10 meters tall that develops a thick trunk, up to 1 meter in diameter. The leaves are paripinnate, dark green, 10-20 centimeters long.

It is native to the Mediterranean Basin, being very common in the Balearic Islands, found in open fields.

It is a tree that can reach a height of up to 30 meters, with a straight and thick trunk up to 2 meters in diameter whose scientific name is Castanea sativa. Its crown is wide, formed by leaves measuring 8 to 22 by 4,5 to 8 centimeters, serrated, glabrous on the upper surface and somewhat pubescent on the underside.

In Spain we find it especially in the extreme north of the peninsula, especially in Galicia. Likewise, it is also present in Gran Canaria, Tenerife and north of La Palma. There are no forests in the Balearic Islands, but it can grow in the north of the archipelago.

Our Fagus sylvatica They are deciduous trees 35 to 40 meters high, which develop a straight trunk and not very branched. The leaves are generally green, although their color can be purple in the variety Fagus sylvatica var. atropurpurea.

In Spain it is frequent in the Cantabrian mountain range, as well as in the Pyrenees. Outside of this range it is very, very rare, being found only in some gardens as long as the conditions are right.

The strawberry tree, whose scientific name is Arbutus unedo, it is an evergreen seedling up to 7 meters high with leaves of 8 by 3 centimeters, bright green on the upper side and dull on the underside. Its trunk is reddish brown, and it often grows somewhat sloping.

It is native to the Mediterranean region, found in mixed forests and on slopes in holm oaks or oak groves. Nevertheless, in the Canary Islands it is considered an invasive exotic species, its introduction to the natural environment as well as its possession being prohibited. 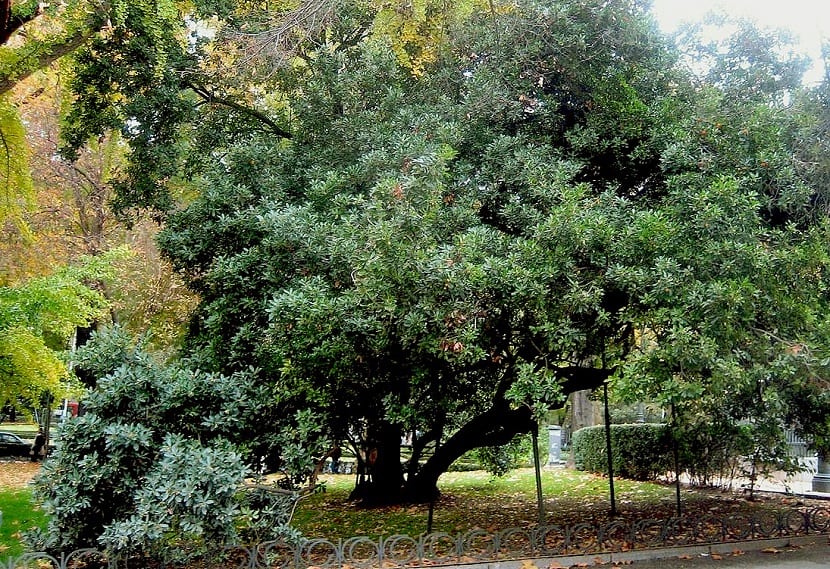 Related article:
The strawberry tree as a typical Mediterranean tree

It is a tree with a straight trunk that it can reach up to 40 meters in height. Its crown is very dense, made up of simple, alternate and drooping green leaves. It receives the names of montane elm or mountain elm, and in botanical slang it is called ulmus glabra.

In Spain it grows especially in the Catalan Pyrenees, as well as in Galicia, Cantabria, the Basque Country, Asturias and Aragon.

His scientific name is acer opalus, and it is one of the few species of maples indigenous to the country. Reaches a height of 20 meters, with a trunk up to 1 meter in diameter. Its leaves are shiny green, 7 to 13cm long by 5 to 16cm wide, palm-shaped, and deciduous.

Known as Aleppo pine too, or by the scientific name propagating through a pine forest (Pinus halepensis)., it is an evergreen conifer that reaches a height of 25 meters. Its trunk acquires a tortuous shape, with an irregular and very dense crown.

It is native to the eastern half of the Iberian Peninsula, as well as to the Balearic Islands. It is widely used in low maintenance gardens for its resistance to drought, high temperatures and moderate frosts.

Also known as sessile oak or winter oak, and by its scientific name Oak, it is a deciduous tree of great height: it can exceed 40 meters, with an ovate and rounded crown, quite regular, composed of alternate and greenish leaves.

It is present in the north of the peninsula, from sea level to 1000 meters above sea level. It has been cultivated since ancient times in Madrid, specifically in the Casa de Campo.

His scientific name is Taxus baccata and it is an evergreen conifer considered a living fossil: it belongs to a group of plants that already inhabited the Earth in the Jurassic period, that is, more than 140 million years ago. Grows to a height of 10 to 20 meters, with a thick trunk up to 4 meters in diameter.

It grows naturally from 800 meters above sea level, especially in mountainous areas. We will find it especially in Asturias, Cantabria and Zamora, although it is also present throughout the northern tip of the peninsula, and in parts of Catalonia and the Valencian Community, as well as in the north of the island of Mallorca.

Related article:
Where to plant a yew tree?

What do you think of these trees?

Full path to article: Gardening On » Plants » Trees and shrubs » 10 types of trees native to Spain