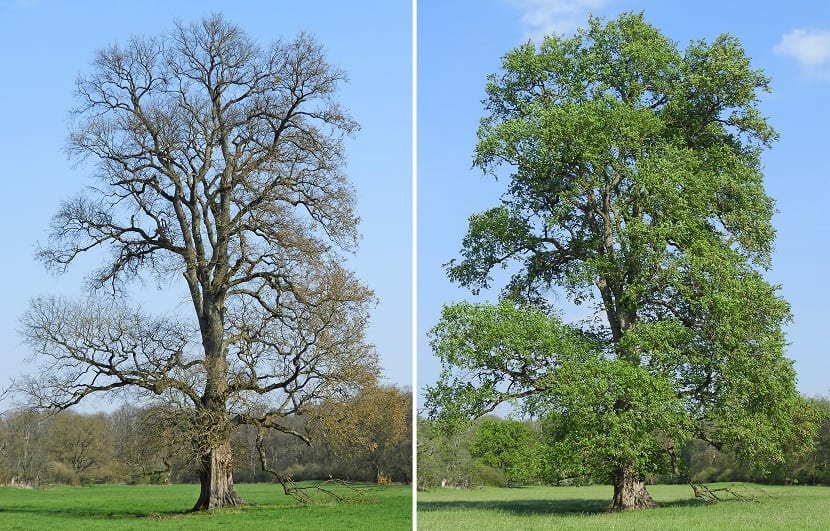 Today we are going to talk about a tree that, at a certain time of year, loses all its foliage to only remain on empty branches. Its about Ulmus It is known by the common name elm and it is a deciduous tree that reaches an average height of 40 meters. They make up a genus made up of numerous species, of which we will see the most important. It is a large, robust tree and its image impacts more than one when seeing it.

In this article we are going to tell you the characteristics and general care of the trees of the genus Ulmus and describe the main best-known species.

The trunks of these trees are quite thick though not always totally straight. Sometimes we find it in a tortuous way. One specialty these trees have is that, as they mature and become old, the trunk begins to become hollow. Above all, it occurs in specimens that, in order to take good care of them and present a beautiful aesthetic both in parks and gardens, are subjected to frequent pruning. The bark that covers the trunk is quite rough and cracked in texture. It has a brown color, sometimes with darker tones and other times grayish in color.

It is a tree that is used to decorate both parks and gardens with the important utility that it provides a fairly large shade. By having a crown with dense foliage, thin but very numerous twigs, it is capable of storing thousands of leaves that provide shade. Said leaves have a simple, alternate and ovate shape. The edges of the blades are doubly serrated and heart-shaped. Its symmetry is basal.

Furthermore, the flowers are grouped in inflorescences that can gather up to 30 flowers. They give rise to a fruit that spreads before the leaves have fully formed. Its fruit has a flattened shape on one side and is said to be in the shape of a samara. The fruits at birth are green in color and when they mature they turn yellowish. They fructify in late winter when spring arrives and temperatures are higher.

Typically, trees of the genus Ulmus are found in temperate climates in the northern hemisphere. There is no distinction between continents. It prefers moist, deep soils that have enough organic matter to compost. Its cultivation can be carried out in some areas of the southern hemisphere, as long as these environmental conditions are controlled.

The type of climate where Ulmus thrives and has good soil conditions makes it quite resistant to almost all types of pests and diseases. If it is not in the ideal condition, it will suffer from some problem. For example, some of the main species of this genus are being affected by a mushroom called Ceratocystis ulmi and by a disease known as graphiosis.

The fungus we have seen is carried by beetles with incredible speed. The disease affects many specimens throughout the world, mainly in Europe. This is causing the reduction of their populations by up to 80%, so Ulmus is already considered an endangered species.

Now we are going to analyze the uses of this tree. Having numerous health benefits, it is used in different ways. The bark is the part of the elm that is most used. Through the preparation of tinctures or in the form of infusions, it can be used to treat problems of spasms, stomach cramps and for its antidiarrheal effect. There are many studies on elm bark and they place it in medicine as an astringent, antispasmodic and it has been revealed to have expectorant properties. This has led to its use in modern medicine for various problems of the respiratory system.

It also has antibacterial properties that help treat various superficial wounds. For deeper wounds its use is not recommended, as it can cause serious irritations. In ancient times, until relatively recently, the wood of the elm has been used for the construction of boats. This is because it has a high resistance to water. When it dries, easy to bend into different shapes. It was valued quite well in furniture and cabinetmaking uses thanks to the dark hue that it acquires over time.

At present, its use has declined considerably since their populations are declining dramatically.

Main species of the genus Ulmus

It is known by the name of common elm. It can reach a maximum height of about 30 meters high. It has a fairly rapid growth, especially when they are young. The leaves are used to feed some domestic animals such as turtles or rabbits. It grows in altitudes from 0 meters to 1650 meters.

It can withstand frosts down to -20 degrees, but it does not tolerate salt. You can prune it to remove dry and old branches.

It is known by the common name of mountain elm. It is found in mixed forests, beech or fir trees. Its maximum height can be up to 40 meters. The bark has astringent and sudorific properties. It prefers fertile soils and resists pollution and wind.

Its common name is chinese elm. It is the typical bonsai that is had indoors. It does not tolerate frost or a long time of direct sun. You have to water it 2 or 3 times in weeks in summer to keep it moist.

Vulgarly known as siberian elm. Its height is about 15 meters and it grows rapidly in its early years. It adapts to all types of soils, including limestone. It is convenient to do a thinning pruning of branches every 3-4 years to avoid excess foliage.

Known as white elm or trembling elm. It reaches a height of approximately 35 meters and can grow from sea level to 1700 meters. It adapts to a large number of soils.

I hope that with this information you can learn more about the main species of the genus Ulmus.