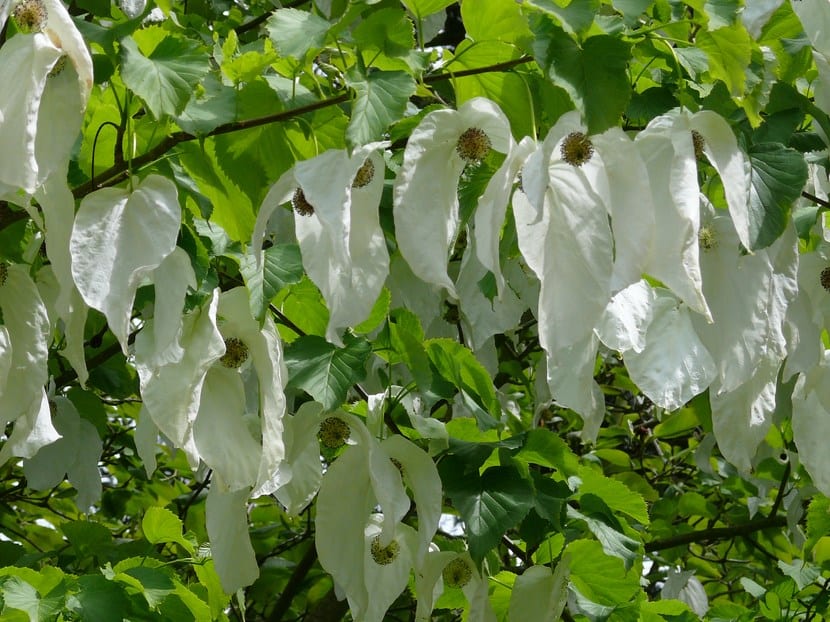 It is one of the most beautiful trees on the planet and also one of the most curious, with its large heart-shaped leaves and its exceptional white flowers, which make it a small wonder of nature.

El Handkerchief Tree it is one of the most original and spectacular species in the world, a kind of unique characteristics that arouses the attention of whoever is close to its orbit. It's a ornamental tree worthy of enjoyment and admiration, originally from China and very special indeed.

Ideal to enjoy during the month of May and throughout the summer, the Handkerchief Tree, is also known as Pigeon tree, names that refer to characteristic white dangling flowers during the flowering season.
It is native to southern China and its scientific name is Davidia involved. It is a generously sized tree that can reach a crown of up to 25 meters, which is also very wide, although its trunk is short.

The leaves are similar to those of the lime trees as they are long, symmetrical, oval and heart-shaped, and can reach up to 20 cm long and 7 cm wide. They have very marked veins and long petioles as well as a whitish hair on the back of them.

However, the most striking are undoubtedly its flowers that, unlike the vast majority, are presented in compact groups, have a reddish center and two totally white bracts, leaves or petals between 12 and 25 cm long that resemble kerchiefs or pigeon wings. One of the bracts is larger than the other and although when the tree is in bloom it is a visual spectacle, you have to be patient as it takes between eight and ten years to have its first flowering.

The Tree of Handkerchiefs also features some edible fruits oval in shape that change color according to the season, first they are green, then purple to finally turn to a dark brown in autumn.

La Handkerchief Tree Belongs to the Cornaceae family and it was discovered by a Franciscan missionary named Father Armand David. It was from his surname that his Latin name was born.

It's a fast growing tree which is not common to find in cities since it is very sensitive to pollution. The species needs to live in spacious places with clean air.

As for its needs, it needs exposure to the sun and prefers not to tolerate calcareous or very humid soils. For this reason, irrigation must be moderate. It is a resistant and really beautiful tree that supports low temperatures well and does not present major contradictions other than the aforementioned.

If you travel to the south of China, look up and see this wonderful tree that has a unique originality and a very particular beauty.

Full path to article: Gardening On » Plants » Trees and shrubs » The wonderful Tree of Handkerchiefs