To appreciate the thanks of Jupiter tree you have to wait until summer because then it is covered with flowers and that is when you can enjoy the charm of this wonderful ornamental tree.

The Jupiter Tree is one of those beautiful species that nature has given us. Colorful, delicate and striking at the same time, it has a leafy crown that is covered with flowers that contrast with the green of its leaves.


Many of the ornamental trees are native to the Orient. This is the case of the beautiful Tree of Handkerchiefs and also of this beautiful tree also known as Indian Lilas, which is a great gift in summer and autumn, when it is covered with flowers and awakens the attention of those who walk by.

The scientific name of the tree is lagersroemia and it can also be known as Lila del Sur and Espumillas. Belongs to the family Lythraceae and it has a smooth dark brown bark and a different trunk from the ordinary one, twisted and with quadrangular stems.

It is a slow growing tree so it takes several years to enjoy its round and leafy crown. Undoubtedly, the great time to enjoy the Jupiter Tree is during flowering, when all kinds of bouquets in various shades of pink appear in the glass.

The tree in turn has its fruits, which are pods where the seeds are housed, dark brown in color. As for the leaves, they change color throughout the year and thus become coppery in winter, bright green in summer, and yellow and orange in autumn.

Within the species, there are different varieties the best known being the following: Nivea (white flowers) and Red Imperator (red, lilac and lavender flowers). There are also the dwarf varieties, which can grow in large pots or in smaller places. These are: Pink Ruffles (with pink flowers), White Dwarf (white flowers), Lavender Dwarf (flowers in lavender tones), Victor (deep red flowers) 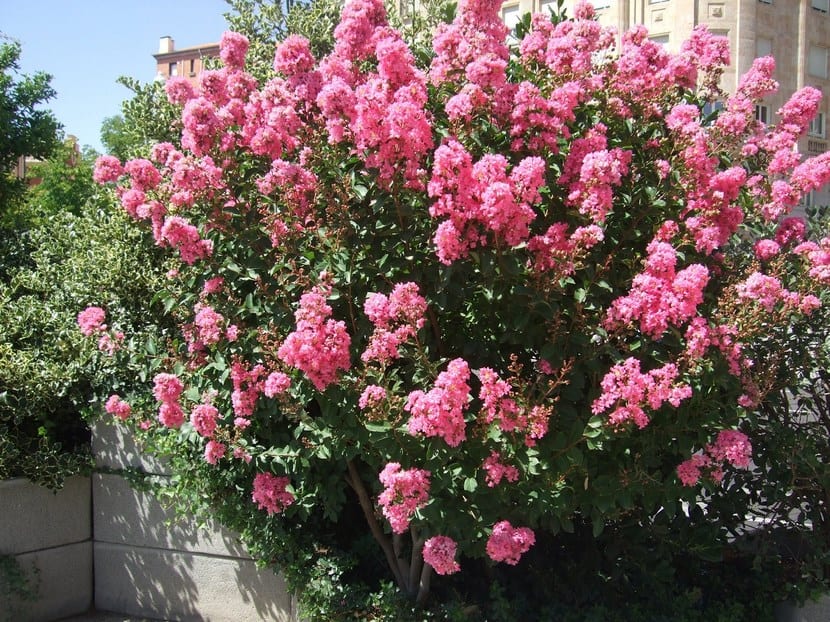 To have the Jupiter tree in good condition it is necessary to be exposed to the sun. If you grow it in a pot, make sure it is a large one because it needs a large space to grow.

The tree can withstand low temperatures although the ideal is that it lives in warm places as it does not tolerate strong frosts. In cold winters, it is best to protect the tree with plastic.

As for the soil, it does not tolerate alkaline soils as it leads to yellowing of the leaves. He also cannot stand poorly drained dreams. The ideal is a fertile land with some (little) humidity.

The ideal is to carry out a formation pruning and an annual one, it is important to prune the plant at the end of winter to remove the weakest branches. You also have to remove the suckers that may appear and the wilted flowers as this will help lengthen the flowering.

El Jupiter tree it is attacked by Oidium, a very common fungus among plants, as well as other fungi such as Cercospora and Phyllosticta. You can detect them by the appearance of an ash-colored dust on the surface of the leaves.

Full path to article: Gardening On » Plants » Trees and shrubs » Jupiter tree, the beauty in your garden