Orchids are one of the plants that, since they became fashionable, continue to be in the homes of many green lovers. But these don't last forever, and you often have to learn how to prune orchids to keep them healthy. You know how to do it?

If you have been given an orchid, or You have had it for a long time and it is beginning to smooth, perhaps what it needs is a little pruning but how to do it? We explain it to you below.

When to prune an orchid

Before delving into how to prune orchids, it is important that you know the right time to do it, since it is not always at a specific time but rather your own orchid will tell you.

As you know, the flowers it throws are not forever; They have a period. However, depending on the plant, this can be higher or lower. In other words, they can last for weeks or even a year without losing vigor.

Therefore, pruning will depend a lot on the plant. Only when you see that the stem from which the flowers come out begins to lose its leaves and turn yellow will it be time to prune.

But, be careful, it does not mean that you can do it completely. And it is that, sometimes, it may happen that the stem itself has another bud and that implies that, from that same one, it can bloom again there. So you have two situations:

How to prune orchids step by step 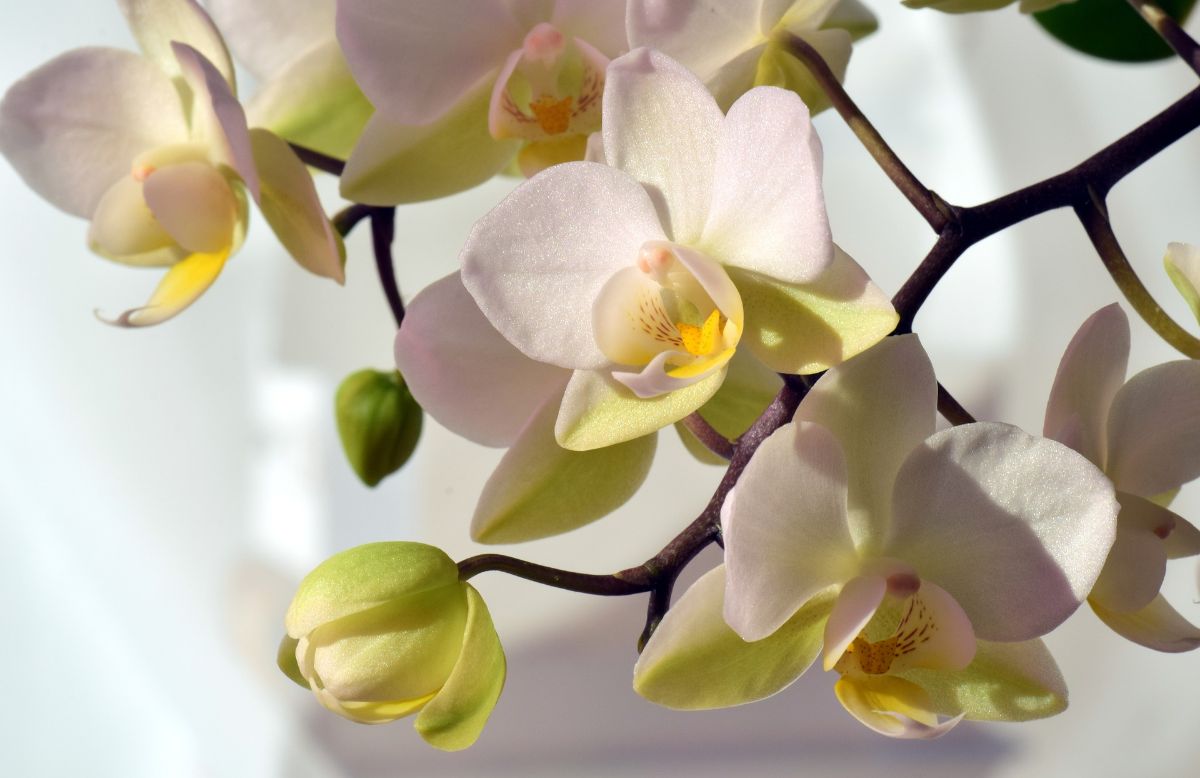 Now we are going to get into how to prune orchids. Actually, there is no mystery, but it is important to do it well so that the following year it blooms again with force (and above all so that it does not weaken or become a focus of diseases).

The first step to pruning orchids, as well as any plant that you need to prune, is to have the right tools on hand. In this case, as it is a small plant and whose stems are not very hard, with pruning shears will be more than enough.

Yes, make sure sterilize them. It may seem silly, but if you use them dirty, or if you have cut other plants, diseases can be transmitted. To give you an idea, you wouldn't stick yourself with someone else's needle, right? Well, in the case of plants it is the same.

To sterilize them, simply pass a cloth with alcohol. Run it through the blades (both sides) and even the handle.

You must also make sure that the scissors cut well, since the least convenient thing for you is to make a dirty cut, that is, that it does not cut well, that you have to stress the plant to be able to cut that stem or leaves.

With the pruning shears ready, another of the elements that We recommend you have a little cinnamon powder on hand. The kitchen cinnamon, yes.

It is an element that seals very well the cuts and wounds of the plants, preventing the entry of diseases that damage their health. That's why, when you cut, if you add a little bit it won't hurt; on the contrary.

As accessories, we could recommend that have a large container to work the plant and that if you drop something from your soil, it should not be spread around the house. As well as orchid soil and a new pot in case the one you have breaks or is no longer the right one.

We start at the bottom, that is, where the orchid has its leaves. The most normal, in general, is that these remain green all year. But it may happen that some turn yellow. Normally it is said that when this happens it is because we have gone too far with the irrigation; but it can also happen because the plant begins to hibernate or because it does not have enough nutrients.

Whatever the case, the first thing is to cut that sheet. They are no longer of any use to you, and they are stealing energy from you.

Now we focus on the part of the stems, or rods. There are orchids that have only one, another two, another three... You have to check each of them separately since they do not all wither at the same time, but they go by steps (and some can even be maintained over time).

If you see that it is dry, cut it from the third knot. Counting from where? Well, from the base. Cut from there.

It does not mean that we are going to leave it that way, but the first cut is given there so that the orchid suffers less.

Now you must see how the stem is from the base to that third node. If it is dry, or is drying out, you can cut it at the base without problem. But if it's still green and consistent, put a little cinnamon on the cut you've given it and let it be. There are some times that the orchid sprouts again there.

Take the plant out of its pot

This is something that many people do, but it is part of orchid pruning. Consists in remove the plant from the pot, remove the soil it has and thoroughly check the roots. So that? Well, because the next step is to cut all those that look black, dry or rotten.

This is a sanitation pruning and quite stressful for the plant, so don't be surprised if it gets a little rough.

Replant it in new soil

Once you finish with the roots, the pruning as such will be over and you will only it remains to put it back in the pot (or in a new larger one) and fill with new orchid soil (so that it nourishes it better).

It is also perhaps the most complicated part because you will have to help yourself with a stick or similar to get the soil to reach all corners without damaging the roots of the plant itself (and that there are no holes left).

Is it clear to you how to prune orchids? Now it's your turn.

Full path to article: Gardening On » Flores » Orchid » How to prune orchids