In the tropics they are extremely lucky to have a great variety of tree species with magnificent flowers; However, although in temperate regions we do not have so much, there are some plants that, when their flowers decide to sprout, become an authentic natural spectacle. One of the most beautiful trees is the Prunus.

Regardless of what type it is, it is a plant with which we can have a good corner of shade and immense joy in spring. As if that were not enough, there are several species with which we can calm our stomach. So, if we take into account all this, we could not stop writing a special article with all the information about him, the Prunus.

Our protagonist is a genus of generally deciduous trees or shrubs (they lose their leaves in autumn-winter and sprout again in spring) that belongs to the botanical family Rosaceae. They grow naturally in temperate regions around the worldespecially from Europe and Asia. There are a total of 100 accepted species out of the 700 described, which have the following characteristics:

Within the genus there are six subgenres, which are:

Most cultivated species in the world

It is a deciduous tree known as garden plum, ornamental cherry or cherry-plum, native to central and eastern Europe. Grows to a maximum height de 15m. Its leaves are very showy, since they are a very beautiful reddish brown.

In addition, although it is cultivated as an ornamental, it is a plant whose fruits are edible. In fact, you can make jams with them. And in case this does not end up being interesting to you, tell you that withstands cold down to -7ºC.

It is a variety of Prunus cerasifera known as purple-leaved plum native to Persia. It's about a deciduous tree that grows between 6 and 15 meters Tall.

Known by the names Royal Laurel, Cherry Laurel or Lauroceraso, it is a large shrub or small evergreen tree that can reach a height meters of 10. It blooms in spring and, if conditions are right, it can also do so in fall.

It is often used as a hedge or to fill gaps. It is a plant that tolerates pruning very well, and resists the cold until the -10ºC. 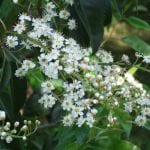 Known as Azarero, Laurel de Portugal, Loro or Palo de loro, this is a evergreen shrub or arboreal plant that reaches a height of up to 8 meters native to Portugal, the Canary Islands and North Africa. Its flowers are small but very abundant, white and perfumed.

The Saint Lucia Cherry is a deciduous shrub or tree native to North Africa, and central and southern Europe that reaches a height up to 10 meters. The white flowers that it produces are very decorative, in addition, over time it gives very good shade.

The Japanese Apricot or Chinese Plum is a deciduous tree originally from China who, after being taken to Korea and Japan, has managed to become naturalized in these countries. Reaches a height of up to 10 meters. It produces magnificent flowers, which is why it is used above all as an ornamental; Still, it must be said that the fruit is edible, but it has a bitter taste.

The cluster cherry, cherry or alder, cerisuela or pado cherry is a deciduous tree native to the humid forests of Europe, Western Asia and North Africa that grows to a height of 6-7 meters. Its wonderful white flowers are arranged in long, hanging clusters, which gives the plant an incredible appearance.

It resists the cold until -7ºC.

Much better known as japanese cherry or Japanese cherry, it is a deciduous tree native to Japan, Korea and China that grows to a height 6-7 meters. It is one of the most interesting species, since when it blooms its branches are hidden behind the petals and it seems that it only has a trunk and flowers.

It is a variety of Japanese cherry native to Japan, China and Korea that grows to 6-9 meters. In spring, before the leaves emerge, large numbers of white or pink flowers sprout.

The apricot tree, also known as apricot, apricot, apricot or albergero, is a deciduous tree native to China, Turkey, Iran, Armenia, Azerbaijan and Syria that grows to a height 3-6 meters. The flowers are white, and the fruit is an edible drupe that is consumed fresh, and is also used to make jams.

El cerezo is a deciduous fruit tree native to Europe and Western Asia. It grows to a height of 30 meters, although in cultivation it is not allowed to exceed 6-7m. The flowers are of a beautiful white color, but without a doubt what draws the most attention are its fruits: the cherries, which can be eaten fresh from the plant, in jams, and even a liqueur is made with them called maraschino.

The plum is a deciduous tree up to 6 meters tall native to Europe and western Asia. It is a beautiful tree that can be used both to decorate the garden and the orchard, because its flowers are wonderful and its fruits have an exquisite flavor, so much so that they are consumed fresh as well as in juices or jams.

The Prunus insititia, whose scientific name is Prunus domestica subsp. institute, is a variety of plum known as wild plum, damascene plum, Damascus plum or greater blackthorn native to Syria. It differs from the plum tree by its fruits, which are smaller, and because of the color of their skin, which ranges from blue to indigo.

El almond It is a small deciduous tree Originally from the mountainous regions of Central Asia, it has managed to become naturalized in the Mediterranean. Reach a maximum height meters of 5. Its fruits, almonds, are eaten fresh, either in desserts or as snacks.

The peach tree or peach tree is a deciduous tree originally from China, Afghanistan and Iran. Reaches a height of 6-8 meters. During spring, before the leaves sprout, beautiful pink flowers sprout, which makes it a beautiful garden tree ... but also a garden tree, since its fruits are delicious and can be eaten fresh. 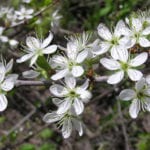 Blackthorn It is a very matted and thorny deciduous shrub that grows up to 4 meters in height originally from Europe. In Spain it is also known as sloe or arañón in areas of the north of the peninsula, and as Abruños or Ameixa Brava in areas of Galicia. Its fruits are rich in fiber, and they are also an excellent source of potassium, iron and calcium. They can be consumed fresh, but also to make jams, jellies and to prepare pacharán.

How do you take care of yourself?

After seeing so many wonders, you feel like having one, right? But, to have them perfectly healthy you have to know some things to be able to provide them with the best care, which are what I am going to tell you now:

What did you think of Prunus? Nice, right?